CAN THE WHITE RACE SURVIVE 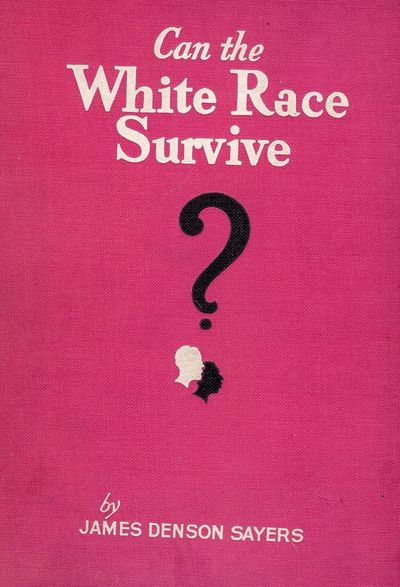 by SAYERS, James Denson
1929. SAYERS, James Denson. CAN THE WHITE RACE SURVIVE? Washington, DC: The Independent Publishing Company, 1929. 8vo., pink cloth, stamped in black & white; 255 pages. First Edition. Illustrated with more than 30 full-page photographic illustrations. Sayers was a writer and Esperantist, who often used pseudonyms as a writer. This racist title argues against mixed-blood races. "[From the Publisher's Note]: "American civilization will progress just so long as the blood streams of the white and of the inferior races flow in separate channels, but should they ever meet, and of course produce a mongrel race, American civilization will unquestionably perish." Signed presentation from Sayers on the front endpaper, to writer, socialist and atheist Clement Wood: "To Clement Wood with sincere esteem, the author, James Denson Sayers. New York, Nov. 23, 1933." Wood [1888-1950] was an American writer, socialist and lecturer on atheism. He was briefly secretary to America's number-one muckraker, Upton Sinclair. An uncommon book, especially inscribed by the author & with a nice association. Very Good (covers bright & unrubbed but with some soil & little edgewear; contents clean & tight). $185.00. (Inventory #: 1940)
$185.00 add to cart or Buy Direct from Antic Hay Books
Share this item
Antic Hay Books
Offered by

THE CANDLESTICKS AND THE CROSS

NY : G.P. Putnam's Sons , 1967
(click for more details about THE CANDLESTICKS AND THE CROSS)
View all from this seller>