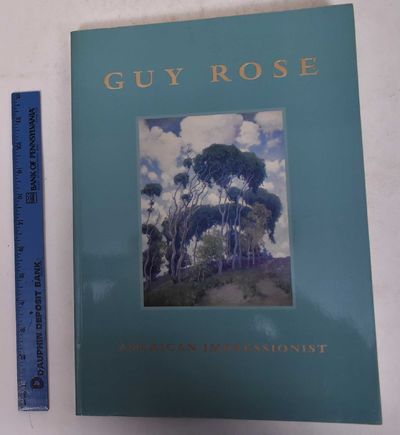 by South, Will, et al.
Oakland, Calif: The Oakland Museum, 1995. Softcover. VG. Aqua wraps. 188 pp. 30 bw, 130 color plates. OVERSIZE. Examines the life and work of one of California's top impressionists, Guy Rose (1867-1925). From the cover... "The publication of Guy Rose: American Impressionist marks the rediscovery of an American master of the Imressionist style of painting after more than half a century of virtual neglect...Illustrated by dozens of paintings, most of them never before published, this book reveals Guy Roses's mastery of serveral styles in a variety of subjects, from early still lifes to intimate figure studies, from picturesque scenes of the French countryside to spectatular views of California's Pacific coast at Laguna Beach and Carmel/Monterey. This publication, which includes not only essays but also a detailed chronology of the artist's life and an extensive exhibition record, will provide new and revised information that will serve as a welcome addition to the history of American art."--From front cover flap" With introduction by William H. Gerdts and essay by Jean Stern. Contents as follows: A Rose family perspective, building a collection / Roy Rose -- Guy Rose, an introduction / William H. Gerdts -- Guy Rose (1867-1925), an American Impressionist / Will South -- Guy Rose and the Los Angeles art community / Jean Stern -- Chronology / Marian Yoshiki-Kovinick. (Inventory #: 17354)
$24.99 add to cart or Buy Direct from Mullen Books
Share this item