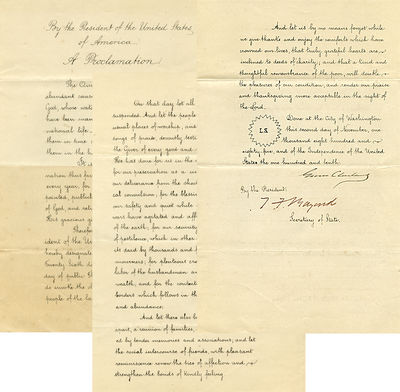 signed
by Cleveland, Grover
The holiday we know today as Thanksgiving was conceived by Sarah Josepha Hale, editor of the prominent magazine Godey’s Lady’s Book, who en- gaged in a campaign over years to get Thanksgiving accepted as a national holiday in the United States. She recommended this to Abraham Lincoln in 1861, and on November 28, 1861, he signed a proclamation saying, “I do therefore invite my fellow citizens in every part of the United States, and also those who are at sea and those who are sojourning in foreign lands, to set apart and observe the last Thursday of November next, as a day of Thanksgiving.” The next national Thanksgiving was declared by Lincoln in April 1862, and in 1863 he declared Thanksgivings for both August 6 and the last Thursday in Novem- ber. He went on to declare a similar Thanksgiving observance in 1864, establishing a precedent that was followed by his succes- sor, Andrew Johnson, who declared a Thanksgiving for December 7, 1865. John- son gave government employees the day off, making the day a legal holiday. The precedent established by Lincoln has been adhered to by every subsequent president. Document Signed, Washington, No- vember 2, 1885. The President declares “It is fitting and proper that a nation thus favored should on one day in every year... publicly acknowledge the goodness of God and return thanks to Him for all His gra- cious gifts. Therefore I, Grover Cleveland, President of the United States of America, do hereby designate and set apart Thurs- day the 26th of November instant as a day of public Thanksgiving and prayer, and do invoke the observance of the same by all the people of the land.” The document is countersigned by Secretary of State Thomas Bayard. Every president’s of- ficial Thanksgiving proclamation is, of course, in the National Archives. Along with these official proclamations, pres- idents have signed several additional copies to be distributed to officials. This is one of those copies and marks Cleveland’s first Thanksgiving procla- mation in the White House. In 1941, Congress enacted a law to fix the date of Thanksgiving at the fourth Thursday in November, and FDR signed it. Thus did Thanksgiving be- come an “official” national holiday. (Inventory #: 9288)
$9000.00 add to cart Available from Raab Collection
Share this item

Woodrow Wilson: The Democratic Party Represents a Larger Part of the Progressive Power and Thought of the Country Than any Other Party

﻿Kennedy Says the U.S. Must “grasp the opportunities and meet the challenges which confront us as a nation and as leaders in the free world.”