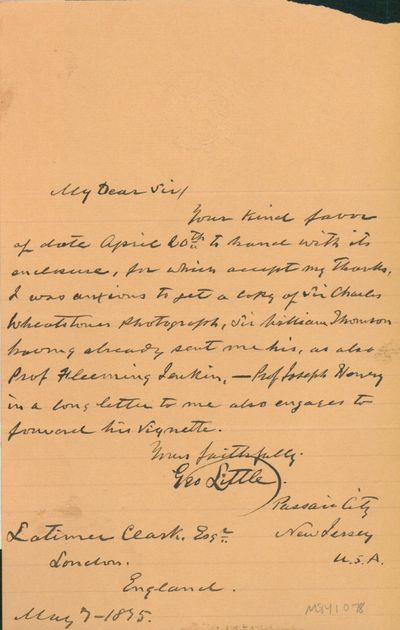 by Little, George
Passaic City, 1875. Little, George. Autograph letter signed to Latimer Clark (1822-98). Passaic City, N.J., May 7, 1875. 1 sheet. 179 x 114 mm. Very good. From one telegraph / communications engineer to another: George Little patented a telegraph design with Alfred Brett in 1847, and in 1869 patented an automatic telegraph in which a perforating apparatus was operated by electro-magnetism, while Latimer Clark participated in the development of electric telegraphy and was one of those responsible for engineering the Atlantic cable. In his letter to Clark, Little acknowledged Clark's "kind favor of date April 20th . . . with its enclosure," and notes that he has requested photographs of telegraphy pioneers Sir Charles Wheatstone, Sir William Thomson, Prof. Fleeming Jenkin and Prof. Joseph Henry. (Inventory #: 41078)
$475.00 add to cart or Buy Direct from
Jeremy Norman & Co.
Share this item
Jeremy Norman & Co., Inc.
Offered by