AMERICA'S NATIONAL GAME HISTORIC FACTS CONCERNING THE BEGINNING EVOLUTION, DEVELOPMENT AND POPULARITY OF BASE BALL WITH PERSONAL REMINISCENCES OF ITS VICISSITUDES, ITS VICTORIES AND ITS VOTARIES 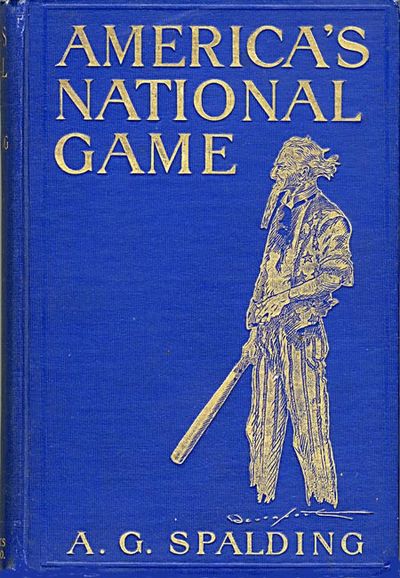 by [Baseball]: Spalding, A.G.
New York: American Sports Publishing Company, 1911. xix,[1],[1]-542pp. Thick octavo. Bright blue ribbed cloth, lettered in gilt, and with gilt depiction of Uncle Sam at bat on the upper cover. Portrait, frontis, illustrations, photographs and plates (some folding). Bookplate on front pastedown, very slight tanning to edges of text block, as usual, early ink name neatly erased from front free endsheet, trivial tiny crack at crown of rear inner hinge -- all relatively minor detractions for an unusually bright, tight copy of a book most often seen in dodgy condition. First edition. Illustrated with 'cartoons' by Homer C. Davenport. One of the key works in the literature of baseball, by one of the prime movers in its codification and development. In addition to his pitching career (which began in 1865), Spalding helped organize the National League, cofounded the Spalding sporting goods company, and published the first official rules guide for the game. This book was published four years prior to his death. (Inventory #: WRCLIT64233)
$2,750.00 add to cart or Buy Direct from
William Reese Co. - Literature
Share this item