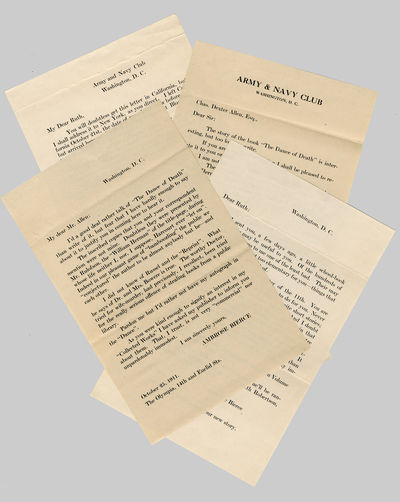 by Bierce, Ambrose
[ New York: Charles Romm, 1921. Four printed single leaves. Wanting the original printed envelope that bore the above caption, a few folds, but otherwise near fine. First edition. A moderately elusive posthumous Bierce publication, about which BAL quotes Starrett: ". . . printed for Charles Romm of New York, a collector, and later a dealer, on the occasion of the sale by auction of his private library [American Art Association, March 4, 1921]. The envelopes were place in the Bierce items offered for sale, one in each volume. I am informed by Mr. Romm that 200 each of the envelopes and letters were printed, but that only about fifty were actually used for the purpose planned. The remaining 150, or thereabouts, were thrown away (!), he asserts . . .'." BAL 1135. (Inventory #: WRCLIT64096)
$250.00 add to cart or Buy Direct from
William Reese Co. - Literature
Share this item

[Np] [nd]
(click for more details about [Autograph Manuscript of:] "THREE CHRISTMASES.")
View all from this seller>