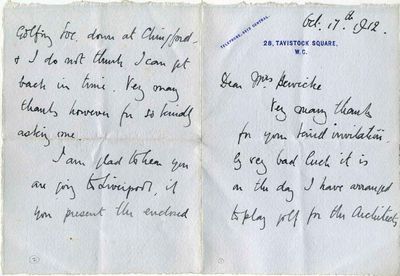 by Scott, Sir Giles Gilbert
London, UK: Not published, 1912. Book. Near fine condition. Unbound. Signed by Author(s). First Edition. Octavo (8vo). 2-page letter dated Sept 2nd, 1912 together with a 4-page letter dated Oct 17th, 1912. Both letters decline invitation made by Mrs. Bewicke. English Architect. Submitted designs in the competition for the proposed Liverpool Cathedral while still a pupil. They were accepted (1903), but because of the winner's young age G. F. Bodley was placed in partnership with him. After his associate's death (1907), Scott redesigned the cathedral, creating a monumental modern Gothic structure. Consecrated in 1924, it was completed in 1978. His many works, chiefly ecclesiastical, include buildings for Clare College, Cambridge, several Oxford University structures; a number of war memorials; and the Waterloo Bridge over the Thames River. Grandson of architect George Gilbert Scott (1811-1878). Sir Giles Gilbert Scott (1880-1960). Autograph.. (Inventory #: 006091)
$350.00 add to cart or Buy Direct from
Kurt Gippert Bookseller
Share this item
Kurt Gippert Bookseller
Offered by