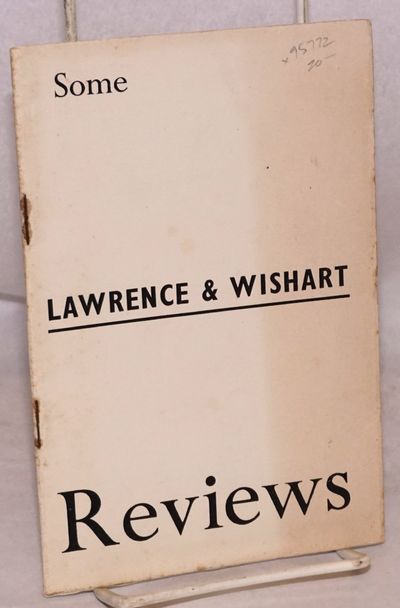 London: Lawrence & Wishart, 1930. 62p., letterpress, staplebound 7.25 x 4.75 inch plain printed wraps. Staples slightly rusted, edges mildly worn and foxed with a small irregular tab where a gathering was opened roughly, blank lower wrap bears some pencilled arithmetic. From five to ten excerpted paragraphs each, from reviews for about fifty books, chosen from a great variety of dailies and weeklies. Reviewers are named where notable --C. Day Lewis, V. S. Pritchett, Sean O'Casey being the best known. L & W had a good list, and some of their books, as with the very first entry, Romm's "Ascent of Mount Stalin," are today scarce and desirable. Howsomever, the L & W selection of quotes is disingenuous, there's not a single naysayer. The works of Lenin (in five parts), even a volume entitled "Second Five Year Plan," draws nothing but encomiums, per the compiler. (Inventory #: 95772)
$20.00 add to cart or Buy Direct from Bolerium Books
Share this item