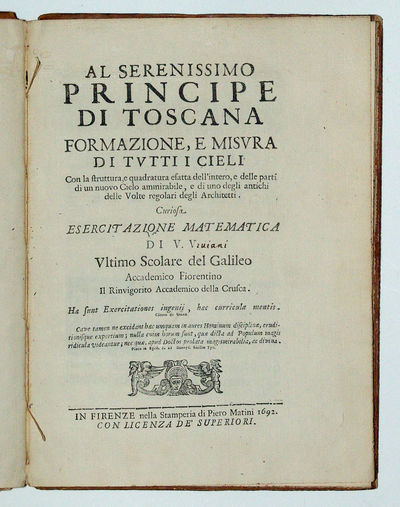 by VIVIANI, Vincenzo
Florence: Piero Matini, 1692. Hardcover. Very Good. 4to - over 9¾ - 12" tall. 4to. [24.2 x 18 cm], xiv, 32 pp., (1) f. ("Ommessioni"), without initial blank, as often. Cancel on p. 17. Several corrections in ink by an early reader. Worming in upper and lower gutter. Bound in contemporary calf,, spine rebacked. Generally very fresh. Very rare first and only edition of this book of geometrical problems proposed by Galileo's last disciple, including Viviani's own solution to the Florentine Enigma he had earlier that year published under a pseudonym. In the dedication to Prince Ferdinand de Medici, he identifies himself for the first time as the author of this challenge, which was occupying Europe's foremost mathematicians. "At the age of 70 Viviani, afflicted by numerous ills contracted in the countryside where he had been sent by his masters, housebound, turned to the many papers in his Geometric Exercises. The work is addressed to the "expert geometers and valorous analysts of Italy and abroad whose stupendous inventions have revealed to the world 'the art of solving knots far more intricate than these.' In this volume he again proposes the problem previously published under the name of D. Pio Lisci Pusillo Geometra." (Cinti, p. 314) "The problem was to perforate a hemispheric arch, having four equal windows, in such a way that the residual surface could be squared. Viviani solved the problem by a method that became well known. It is accomplished by the intersection of four right cylinders, the bases of which are tangent to the base of the hemisphere." (DSB XIV, 49) According to the mathematical historian Montucla, Viviani's solution presented here "is superior to all others." (Riccardi II, 628) The Florentine Enigma drew many responses the same year, most notably one by Leibniz who published it under the title Aenigma architectonico-geometricum Florentia (1692) and dedicated it, too, to Prince Ferdinand. The nature of the intersection of cylinder and hemisphere continued to occupy mathematicians until recent times; contributions to the discussion include Gregorius Maettig Kloss' Einige Anwendungen des Florentiner Problems (1856), or Leopold Klein's Über das Sogenannte Vivianische Fenster (1915). Viviani's work includes seven new geometrical problems of a similar nature, most involving the intersection planes and solid objects and their squares. It is notable that even at this advanced age, when Viviani had built a solid reputation on his own and Galileo had been dead for 50 years, the author signs his work, and heads every page of it, with "Ultimo Scolare [last disciple] del Galileo." OCLC: Burndy, Chicago, Cornell, Harvard, Linda Hall, * Cinti 164 (mentioning the cancel on p. 17); Riccardi I.628-8. (Inventory #: 3533)
$5,850.00 add to cart Available from Martayan Lan
Share this item
Martayan Lan, Inc.
Offered by