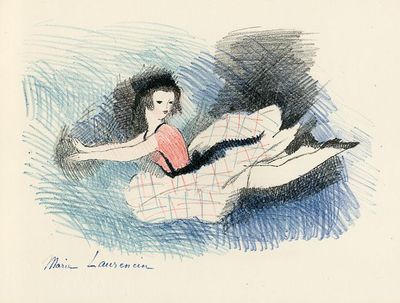 by [Black Sun Press]: Carroll, Lewis [pseud. of C.L. Dodgson]
Paris: The Black Sun Press, 1930. Oblong small quarto. Printed wrappers. A fine, nearly untouched copy, without foxing, in glassine wrapper and somewhat worn and soiled publisher's slipcase and chemise with split at one joint. First edition in this format, American deluxe issue. Illustrated with six original color lithographs by Marie Laurencin printed by Desjobert of Paris. From a total edition of 790 copies, this is one of twenty copies of the American issue specially printed on Hollande Van Gelder, with a duplicate suite of the six lithographs, in sanguine, bound at the end. Five of the six lithographs in the suite are signed by the artist, with the sixth signed in the plate. Laurencin has also signed the limitation page. Neither the copies on Rives nor the special copies on Japon were issued signed, either on the colophon or on the lithographs. MINKOFF A39. MONOD 2304. (Inventory #: WRCLIT64620)
$15,000.00 add to cart or Buy Direct from
William Reese Co. - Literature
Share this item

RUSSIA. "By A Manchester Manufacturer" ...

Edinburgh, London, Manchester & Dublin : William Tait [et al] , 1836
(click for more details about RUSSIA. "By A Manchester Manufacturer" ...)
View all from this seller>