National Costumes of the M.P.R. 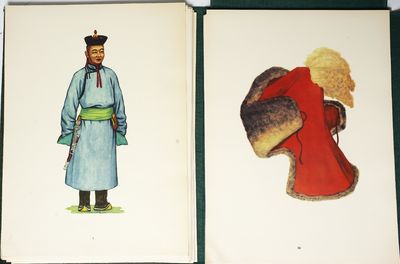 Large quarto. Original green folding case with 100 loose numbered plates in color, some heightened in gold, 24pp. text. Fine copy except for minor stains to folding case. The plates depict costumes, including many different kinds of caps or hats, tobacco pouches, pipes, women pendants and ornaments. According to the introduction: "U.Yadamsuren has with artistic mastery made himself familiar with the skill of the folk artists, artisans, embroiderers, pasters, tailors and all these, whose hands have created those remarkable costumes, and has studied them most exactly, while travelling all over the country. U. Yadamsuren has collected valuable material on the history of Mongolian dress and has made a great number of drawings, only part of which is included in this album" (Schwarz, Bibl. Mongolica i, 186). Produced by the Union of Mongolian Artists.

Yadamsuren is a National Artist and State Prize Winner of the Mongolian People's Republic. (Inventory #: 949)
$350.00 add to cart Available from Golden Legend
Share this item
Golden Legend, Inc.
Offered by