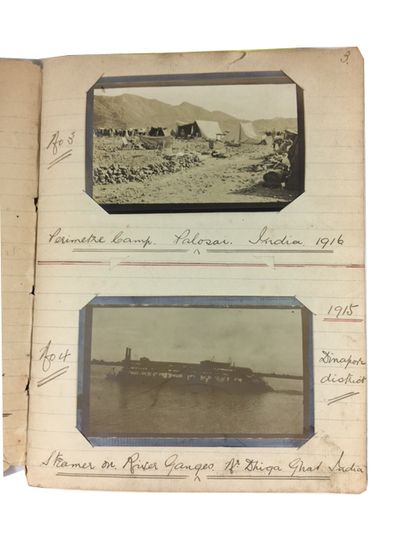 by [Photo Album]
1915. Hardcover. Fair. 100+ photos inserted in corner slits cut into ruled notebook pages. Photo dimensions vary -- most are approx. 9 x 6cm.; several are smaller and a few are larger. We counted 94 photos relating to India; 2 relating to the "Mesopotamian expedition" and 9 commercial photos of Palestine. Quality of photos varies greatly - a few are very high quality, probably professional or commercial; others are amateur shots, some with very good detail, others with browning or fading. Almost every photo is identified by an inked caption beneath or beside the photo. There are only a handful of captions for now-missing photos. The notebook (23cm.) in which they are contained is worn -- the cover is especially worn, has split at the fold and is now held together with three strips of cellophane tape. Our British soldier and his battalion appear to have been located for at least some of his time in India at Dinapore (Danapur), Bihar State. Other locations mentioned include Khanspur, Dunga Gali, Rawalpindi, Amballa, Mokshpuri (Mukeshpuri), Ghora Daka, Subathu, Tullundur and, of course, Darjeeling. Most of the photos relate to military personnel, buildings, and maneuvers; some are scenic views; only a few are of Indians. One of the larger photos is captioned in the image "The Trenches at Mokshpuri" and also signed in the print by what looks like "Baljee" -- the captioning indicates that the trenches were dug by B Company of the 9th Regiment. Another of the larger photos is of three single engine planes and is captioned "Aeroplanes outside Guard Room Amballa India 1917." (Inventory #: 78422)
$450.00 add to cart or Buy Direct from McBlain Books
Share this item

The Compleat Angler or, The Contemplative Man's Recreation Being a Discourse of Rivers Fishponds Fish and Fishing not unworthy the Perusal of most Anglers

Philadelphia : David McKay Co , n.d.
(click for more details about The Compleat Angler or, The Contemplative Man's Recreation Being a Discourse of Rivers Fishponds Fish and Fishing not unworthy the Perusal of most Anglers)