LIFE OF JOSEPH BRANT, (THAYENDANEGEA) Including the Border Wars of the American Revolution, and Sketches of Indian Campaigns of Generals Harmar, St. Clair, and Wayne, and other Matters Connected with the Indian Relations of the United States.. 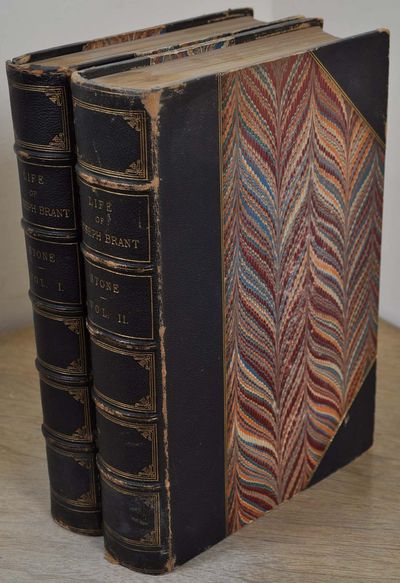 by Stone, William L.
Albany, NY: J. Munsell, 1864. Book. Very good- condition. Hardcover. First thus edition. Small quarto (4to). Two volume set. Vol. I: xxxii, 500 pages of text. Vol. II: viii, 630 pages of text including an index. This is one of only 50 large paper copies printed. Bound is contemporary (old) half leather with raised bands and gilt lettering and decoration on spine and marbled paper-covered boards. Minor rubbing to extremities, with a few tiny chips, with hinges starting to weaken. Bindings remain intact and attractive; protected in custom stiff archival mylar. Illustrated with four portraits and three plans, of which two are fold-out. The top edge of all of the first volume affected by slight staining, which reaches one of the plates and some of the text. The top edge of the second volume is stained as well, but only a few pages at the end of the text, not affecting plates or text. The staining does not detract from the function or exterior appearance of this beautiful set. Howes S1040 "best edition with index added." Title continues"...and Great Britain, from the Peace of 1783 to the Indian Peace of 1795." Engraved bookplates of G. W. Wales and Rodman Wanamaker in each volume. As stated in the National Anthropological Archives; between 1908 and 1913, Wanamaker, son of a Philadelphia department store owner, sponsored three expeditions to the American Indians.These were photographic expeditions intended to document a passing way of life and make the Indian "first-class citizens" to save them from extinction. Joseph K. Dixon was the photographer. On the first expedition, he made many portraits and captured scenes of Indian life. The expedition climaxed on the Crow Reservation with the filming of a motion picture about Hiawatha. The second expedition in 1909 involved a motion filming a reenactment of the Battle of the Little Big Horn. etc. William Leete Stone (1792-1844).. (Inventory #: 006182)
$795.00 add to cart or Buy Direct from
Kurt Gippert Bookseller
Share this item
Kurt Gippert Bookseller
Offered by