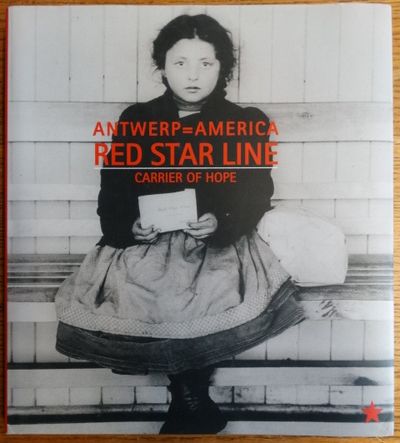 by Jalon, Rita; Frank Caestecker; Lieven Saerens; et. al
Antwerp, Belgium: Petraco-Pandora, 2005. First. Hardbound. VG, first two pages have small tears on the bottom due to a small portion being uncut from the publisher.. Light gray cloth boards with BW pictorial DJ,176pp, numerous color and BW illustrations. From the jacket--Between 1873 and 1934 over 2.7 million people, fleeing poverty and persecution in their native countries, boarded vessels of the Red Star Line in the port of Antwerp, Belgium, to start a new life across the ocean. It was the period of industrial revolution in Europe and the unemployment and starvation for the jobless that followed. [...] Thanks to the Red Star Line, Antwerp was put on the map and developed into one of the major players in the market of European emigration. [...] The Red Star Line represents a highly important part of Antwerp history and is a symbol of its historical link with the United States. This fascinating story is told by eight different writers, all highly respected specialists in their field. (Inventory #: 127767)
$35.00 add to cart or Buy Direct from Mullen Books
Share this item

En Samling Under Udvikling: The Evolution Of A Collection

by Kjeldsen, Kjeld and Charlotte Sabroe

Humlebaek, Denmark : Museum Of Modern Art, Humlebaek , 1988
(click for more details about En Samling Under Udvikling: The Evolution Of A Collection)