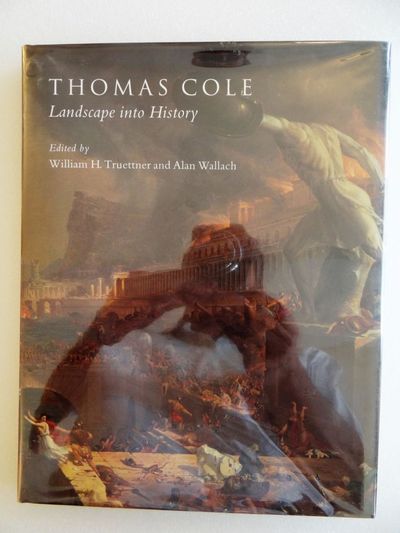 by Truettner, William H. and Alan Wallach
New Haven: Yale University Press, 1994. Hardcover. VG+/VG+ but for owner's name on title page in ink; light rubbing to Mylar cover.. Maroon cloth/boards; gilt lettering. Color-illus. dj with white lettering; Mylar cover. 186 pp. 78 bw, 101 color plates, including a three-panel folding plate of the Course of Empire. Issued to accompany the first major retrospective of this artist in 25 years. This catalogue certainly outperforms the last one, from Rochester in 1969. Terrific color plates; in-depth text with William H. Truettner and Alan Wallach serving as editors and essays by Christine Stansell and Sean Wilentz (Cole's America), Alan Wallach (Thomas Cole: Landscape and The Course of Empire), J. Gray Sweeney (The Advantages of Genius and Virtue: Thomas Cole's Influence, 1848-58) and William Tryettner (Nature and the Native Tradition: The Problem of Two Thomas Coles). Followed by a timeline, catalogue of the exhibition listing 75 works. Great plates. The exhibition was held at the National Museum of American Art, Washington, DC from March to August 1994, followed by shows at the Wadsworth Athanaeum and the New York Historical Society. (Inventory #: 3964)
$70.00 add to cart or Buy Direct from Mullen Books
Share this item