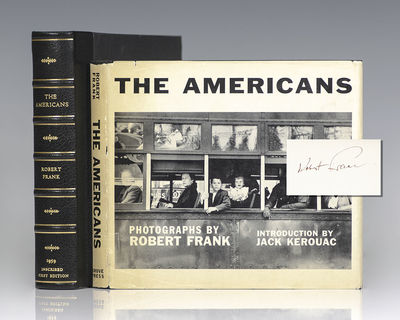 by Frank, Robert; Introduction by Jack Kerouac
New York: Grove Press, 1959. First edition of the photographer's masterpiece with 83 black-and-white full-page photogravures. Oblong quarto, original cloth, illustrated throughout, Presentation copy, inscribed by the photographer opposite the title page, "To Linda Robert Frank." An excellent near fine example in a very good dust jacket that shows light wear and a few small closed tears. Introduction by Jack Kerouac. Housed in a custom half morocco clamshell box. Jack Kerouac wrote in his preface of The Americans, "Robert Frank he sucked a sad poem out of America onto film, taking rank among the tragic poets of the world. To Robert Frank I now give this message. You got eyes." Franks Americans eventually achieved legendary status as "the most renowned photobook of all It struck a chord with a whole generation of American photographers Many memorable photobooks have been derived from this mass of material. None has been more memorable, more influential, nor more fully realized than Franks masterpiece" (Parr & Badger I:247). "From the more than 20,000 images that resulted, Frank eventually chose 83 of them and arranged them into four chapters With these photographs, he later wrote, I have attempted to show a cross-section of the American population. My effort was to express it simply and without confusion. The view is personal Such a simple intention for a book that would so alter the course of modern photography" (Roth, 150). (Inventory #: 1337)
$12500.00 add to cart or Buy Direct from
Raptis Rare Books
Share this item