The Naked and the Dead. 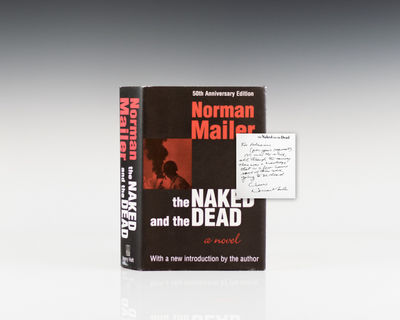 by Mailer, Norman
New York: Henry Holt, 2005. First edition of the 50th Anniversary edition of the author's classic first novel. Thick octavo, original boards. Fine in a fine dust jacket. Inscribed by the author who has transcibed the first line of this title as follows, "All over the ship, all through the convoy there was a knowledge that in a few hours some of them were going to be dead. Norman Mailer." Fine in a near fine dust jacket. The Naked and the Dead follows the story of an army platoon of foot soldiers fighting for the Japanese island of Anopopei. "The best novel to come out of the . . . war, perhaps the best book to come out of any war" (San Francisco Chronicle). "The narrative presents, with great accuracy and power, the agony of the American troops in the Pacific campaign It remains Mailers best, and certainly the best war novel to emerge from the United States" (Burgess, 42-43). (Inventory #: 842)
$975.00 add to cart or Buy Direct from
Raptis Rare Books
Share this item

The Law of God.