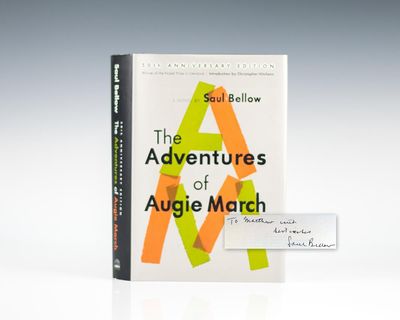 by Bellow, Saul
New York: Viking, 2003. First edition of the release of the 50th Anniversary of Bellow's third and breakthrough book resulting in his first of three unprecedented National Book Awards. Inscribed by Bellow "For ________ with good wishes, Saul Bellow." Rather uncommon signed as Bellow was advanced in years at the publication of this anniversary edition and did not engage in book signings. Fine in a fine dust jacket. Saul Bellow is the only author to have received three National Book Awards, for The Adventures of Augie March, Herzog, and Mr. Sammler’s Planet, in addition to both the Pulitzer and Nobel prizes. The Sunday Times praised these achievements when it revered "Bellow’s oeuvre [as] both timeless and ruthlessly contemporary." (Inventory #: 188)
$975.00 add to cart or Buy Direct from
Raptis Rare Books
Share this item