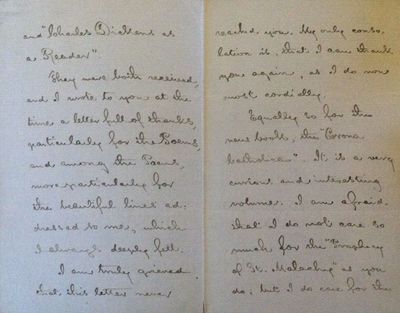 signed
by Longfellow, Henry Wadsworth
4 pp. Cambridge, Apr. 29, 1880. 12mo. Neatly written letter from Longfellow to Charles Kent (1823-1902), well-known English poet, biographer and journalist, concerning a book written by Kent ("Corona Catholica), and others sent to Longfellow for which Kent had never heard back concerning Longfellow's receipt of the books. He writes: "My Dear Mr. Kent, I hasten wit all speed to thank you for your kind letter and for the "Corona Catholica," both of which reached me safely and are very welcome. But I am troubled by what you say of the other books sent so long ago, your collected Poems, and "Charles Dickens as Reader." They were both received and I wrote to you at the time a letter full of thanks, particularly for the Poems and among the Poems, more particularly for the beautiful lines addressed to me, which I always deeply feel." He goes on to say that he is truly grieved that his letter never reached Kent, with the only consolation being this letter. He also thanks Kent for the "Corona" but states that is "very curious..." and that he does care as much for the "Prophecy of St. Malachi" as Kent does. "But I do care for the versions of your lines in various languages. I have always been much interested in such things, and this is a valuable addition to my little store of linguistic curiosities. Signed in full, "Yours faithfully, Henry W. Longfellow. Superb letter in very good condition. (Inventory #: 118)
$1,750.00 add to cart or Buy Direct from
Nudelman Rare Books
Share this item

London : Faber and Faber , 1942
(click for more details about [Eliot, T. S.] Little Gidding)
View all from this seller>