PICTURESQUE AMERICA; or, the land we live in. A delineation by pen and pencil of the mountains, rivers, lakes, forests, water-falls, shores, canyons, valleys, cities, and other picturesque features of our country. With illustrations on steel and wood by eminent artists. Edited by William Cullen Bryant 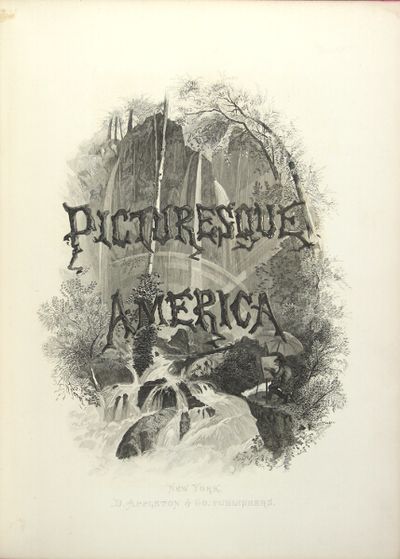 New York: D. Appleton & Co., n.d., 1872. The second of two editions noted in BAL, with Bryant's name on the title and at the end of the preface, but clearly a later issue with the Appleton address on the title page of vol. I changed from Broadway to Bond St. (vol. II retains the Broadway address); 2 volumes, large 4to, complete with engraved frontispiece and title-pp., plus 47 steel-engraved plates and 838 wood-engraved illustrations in the text, 321 of them full-p.; a very good, sound set, in publisher's half black morocco, gilt-lettered spines; several scratches and a bit of rubbing, but overall a pretty nice copy in a firm binding. Stately testimony to the American fascination with American landscape, and a major link in the literary tradition that connects William Bartram with John McPhee. BAL 1732, noting that the literary work was done by Oliver B. Bunce, and that the preface was written and the whole edited by Bryant who, in a letter cited by BAL, says: "I do not remember that I was ever more weary of any literary task." (Inventory #: 34746)
$402.50 add to cart or Buy Direct from
rulon-miller books
Share this item