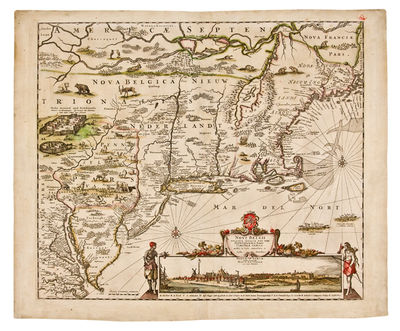 This important map is derived from the Visscher map of about 1655, which is itself drawn from the Janssonius map of 1651. Philip Burden lists three states of this map: the first which was probably published in about 1673 and is easily recognized as it does not include Philadelphia and there is no mention of Pennsylvania in the title. Burden writes of the present second state: "Following the founding of Philadelphia a revised state was produced ... Danckerts updated the map in a significant manner. The Delaware River is completely revised so that it no longer connects with the Hudson River ... Pennsylvania is named, its boundary is marked, and many largely domestic animals are engraved within the region. Recognition of the English hold over New Amsterdam is seen in the addition to the title to the view of [the words]Nieuw Yorck, eetÿs Genaemt above. ... Along with the addition to the view title ... the main [title] ... has had [the words] Pennsylvaniæ, et partis added as the third line." (Burden, II pp.39-40).