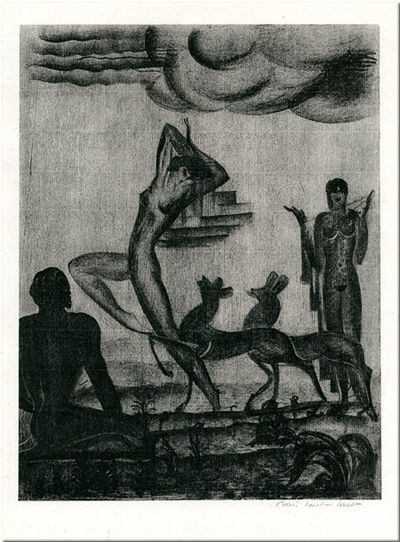 by Lovet-Lorski, Boris
[ Paris: Ad. Braun & Co., 1929. Untitled lithograph. Image size 12 1/4 x 9 3/8" (31.4 x 23.8 cm), with full margins. Fine, in lightly smudged archival matting. One of an edition of 250 impressions printed on Montval, signed in pencil in the lower right margin. Lovet-Lorski (Lithuanian/American 1894-1973), was a major contributor to the American Art Deco style of the 1920's. Although best known as a sculptor, in 1929 Braun & Co. published two portfolios of his lithographs, of which this lithograph was a component. The image is of a female nude figure cavorting with hunting dogs, while a partially robed female nude stands in the background, and a male kneels nude in the foreground. Lovet-Lorski completed a figure in brass of "Diana" (mistress of the hunt) that mirrors the central figures of this piece. Late in life, after arthritis hampered his ability to sculpt, Lovet-Lorski returned to drawing and print-making. His work is held in the collections of the Luxembourg Museum, Paris; Petit Palais, Paris; Bibliotheque Nationale, Paris; British Museum, London; Metropolitan Museum of Art, New York; San Diego Fine Arts Society; Los Angeles Museum of Art; Seattle Art Museum; San Francisco Museum of Fine Arts; Boston University; and Columbia University. (Inventory #: WRCLIT66071)
$650.00 add to cart or Buy Direct from
William Reese Co. - Literature
Share this item

THE MONOTYPE RECORDER A JOURNAL FOR USERS AND POTENTIAL USERS OF "MONOTYPE" MACHINES AND MATRICES ... [wrapper title]

London : The Monotype Corporation Limited , Autumn 1949.
(click for more details about THE MONOTYPE RECORDER A JOURNAL FOR USERS AND POTENTIAL USERS OF "MONOTYPE" MACHINES AND MATRICES ... [wrapper title])

by Yeats, William B.

New York : Macmillan , 1928.
(click for more details about THE TOWER)
View all from this seller>