The Cave at Altamira at Santillana del Mar, Spain 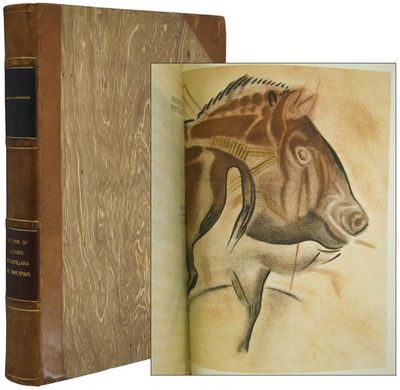 by BREUIL, Henri and OBERMAIER, Hugo
Madrid: Tipografia de Archivos. 1935. An elaborate volume on the prehistoric cave paintings of Altamira, updating a 1906 edition by Breuil and Emile Cartailhac. Large quarto with 52 plates, both black & white photographs and full color plates reproducing Breuil's original drawings of the animals in the Altamira frescoes. A number of the color plates are double pages; all are protected with tissue guards. The caves at Altamira were discovered in the 1870s and were the first caves to be found that contained prehistoric artworks. Their Spanish discoverers were ridiculed for claiming that the paintings belonged to people of the Upper Paleolithic era, and it wasn't until decades later, after numerous other such caves had been found around Europe, that this became a generally recognized truth. Breuil, a French archeologist, visited the site and made drawings of a number of the animals depicted on the cave walls for the 1906 monograph -- notably in particular a species of bison that had been extinct in Spain for thousands of years; three decades later he updated and expanded his work, taking advantage of increased access to the cave and newly available lighting. The present volume has more plates than the earlier one, and all of the earlier images have been updated and improved. The discovery of the caves at Altamira was one of the most significant archeological discoveries of the 19th century, changing forever our understanding of our human forebears. This volume was produced during the Spanish Second Republic, the relatively brief period of liberal democracy preceding the Spanish Civil War and the subsequent forty years of fascist rule. A beautiful book in very good condition, three quarter bound in leather and attractively and elaborately printed. Unless otherwise noted, our first editions are first printings. First Edition. Hardcover. Very Good. (Inventory #: 029041)
$2,500.00 add to cart Available from
Ken Lopez - Bookseller
Share this item

The House of the Seven Gables

Boston : Ticknor, Reed, and Fields , 1851
(click for more details about The House of the Seven Gables)

Edinburgh and London : William Blackwood , 1868
(click for more details about The Spanish Gypsy)
View all from this seller>