A PLAIN, BUT FULL EXPOSITION OF THE CATECHISM OF THE CHURCH OF ENGLAND. ENJOYNED TO BE LEARNED OF EVERY CHILD, BEFORE HE BE BROUGHT TO BE CONFIRMED BY THE BISHOP. COLLECTED OUT OF THE BEST CATECHISTS ... London: Printed for Nathaniel Webb, at the Royal Oak ..., 1663 [bound after]: Rogers, Thomas: THE FAITH, DOCTRINE, AND RELIGION, PROFESSED, AND PROTECTED IN THE REALM OF ENGLAND, AND DOMINIONS OF THE SAME; EXPRESSED IN THIRTY NINE ARTICLES, CONCORDABLY AGREED UPON BY THE REVEREND BISHOPS, AND CLERGY OF THIS KINGDOM, AT TWO SEVERAL MEETINGS, OR CONVOCATIONS OF THEIRS, IN THE YEARS OF OUR LORD, 1562, AND 1604 ...London: Printed by John Field ..., 1661 [bound after:] CONSTITUTIONS AND CANONS ECCLESIASTICAL TREATED UPON BY THE BISHOP OF LONDON, PRESIDENT OF THE CONVOCATION FOR THE PROVINCE OF CANTERBURY, AND THE REST OF THE BISHOPS AND CLERGY OF THE SAID PROVINCE : AND AGREED UPON WITH THE KINGS MAJESTIES LICENCE IN THEIR SYNOD BEGUN AT LONDON, ANNO DOM. 1603 ... 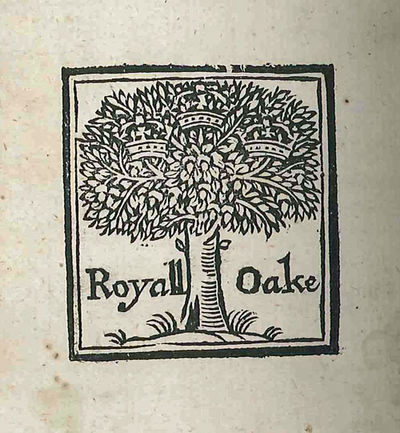 by Nicholson, William, Lord Bishop of Gloucester
London: Printed by John Norton, for Joyce Norton, and Richard Whitaker .., 1660. Three volumes bound in one. [80];[36],56,53- 204,195-222;[16],211,112- 113,[3]pp.(pagination in sequence as bound). Small quartos. Later polished gilt armorial calf, raised bands, gilt label (a bit rubbed and edgeworn). Two institutional bookplates, ink accession numbers in upper margin of first title, scattered foxing, occasionally moderate, last work trimmed a bit close at lower margin, costing a few catchwords and register marks, but generally about very good, with the rare printer's/publisher's colophon on A1v of the Nicholson (remargined at gutter). Later editions/impressions of each, with Nicholson's being the third edition (first published 1661), and the others characteristic later editions of frequently reprinted works. Of interest here is the colophon (a woodcut of a Royal Oak) that appears on the verso of A1 of Nicholson's PLAIN ... EXPOSITION .... It is evidently relatively uncommon, as it does not feature in the collation of record reported in ESTC. ESTC R3881 & R30129 & S420 (unedited record). WING N1116 & R1833. STC 10078.5. (Inventory #: WRCLIT66146)
$575.00 add to cart or Buy Direct from
William Reese Co. - Literature
Share this item

New York : E. Weyhe , 1933.
(click for more details about HENRIETTA SHORE)
View all from this seller>