SPECIMENS OF AMERICAN POETRY, WITH CRITICAL AND BIOGRAPHICAL NOTICES .. 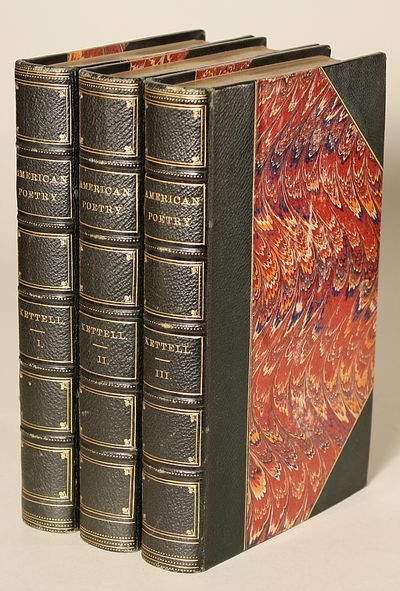 by Kettell, Samuel (editor)
Boston: S. G. Goodrich and Co., 1829. 12mo, three volumes: pp. [i-iii] iv-ix [x-xi] xi-xv [xvi] xvii-xlviii [1] 2-353 [354: blank]; [i-iii] iv-x [1] 2-408; [i-iii] iv-x [1] 2-406, nineteenth-century three-quarter black pebbled morocco and marbled boards, spines and sides tooled in gold, t.e.g., other edges untrimmed. First edition. The first comprehensive anthology of American poetry. It includes poems by 189 American poets, beginning with Cotton Mather and ending with John Greenleaf Whittier. At the end of the third volume is a 28-page "Catalogue of American Poetry" which lists in chronological order "all the poetical works of American origin which have come under notice in the course of this undertaking." "The work was projected by [Samuel Griswold] Goodrich and originally undertaken by a Boston journalist, Frederic S. Hill, and was conceived as a refutation of Sydney Smith and other calumniators of American genius. To make the refutation sufficiently crushing, Kettell went into highways and hedges in search of eligible bards with the result that his collection throws a brilliant light on the state of literary culture in the period covered. The reviewers [e.g. S. A. Eliot, NORTH AMERICAN REVIEW, October 1829] fell foul of its indiscriminate inclusiveness and several editorial shortcomings; Goodrich, in consequence, lost $1,500 on the venture and felt that insult was added to injury when he discovered that SPECIMENS were commonly referred to as 'Goodrich's Kettle of Poetry.'" - DAB. Harris Collection, p. 137. Sabin 37655. A fine copy. (#137385) (Inventory #: 137385)
$750.00 add to cart or Buy Direct from L.W. Currey
Share this item
L.W. Currey Inc.
Offered by