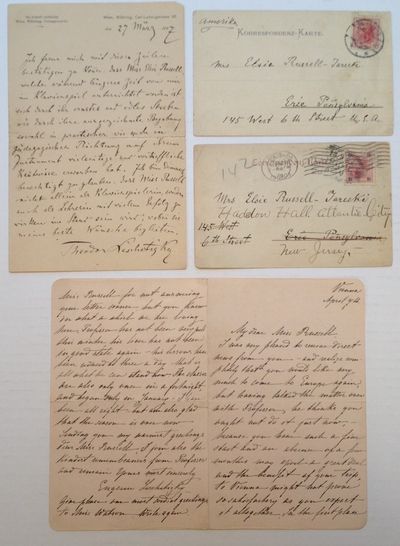 by LESCHETIZKY, Theodor (1830 - 1915)
Vienna, 1907. unbound. Small archive encompassing three letters to a former student from the United States named Elsie Russell, who had studied piano under Leschetizky in the mid-1890s and who went on to have a successful career in her own right. All signed in full. Included is a letter of recommendation, 8vo, 1 page, 7.5 x 5 inches, Wien, March 27, 1897, written in German, stating that, "Miss Elsie Russell, who studied piano with him...showed excellent understanding and he believes that as a performer and teacher she will go on to great success ('vielon erfolg')." The second item in this collection is an autographed note signed on a colorful picture postcard of "Villa Leschetizky," 3.5 x 5.5 inches, Feldgasse, Bad Ischl, Austria, September 12, 1903, in German, sending thanks to his former student for her friendly communication ("Lebenzeichen") and returning his best wishes. The third item is an autographed note signed on a Correspondence card with an engraving of his town house, 3.5 x 5.5 inches, Vienna, January 7, 1907, in German, thanking [the now married] Mrs. Elsie Russell Tarecki for her kindness and sending best wishes for the New Year ("Neujahr's Grussen"). The fourth item is an important autographed letter signed by Eugenie Leschetizky -- a former pupil who became the professor's fourth wife in 1894 and who is said to have controlled his affairs with an iron fist, 8vo, 4 pages, written front and back on a single, folded piece of paper, 6.75 x 8.5 inches, Vienna, April 7, no year, circa 1899, in English, in small part: "I realize completely that you would like very much to come to Europe again...but having talked to Professor, he thinks you ought not do it just now - because you have such a fine start and an absence of a few months may spoil it a great deal...Professor ceases teaching this year much earlier than before because he has not taken any rest at Easter...So you see, you won't not [sic] get even the chance of a few lessons with Professor...You have gone through such good preparatory studies...that Professor thinks it quite useless for you to begin them again. You asked Professor's advice in the question of you coming to Vienna and that is the reason why I give it to you so frankly...instead of encouragement. Professor has not been very well this winter, his liver has not been in a good state again...his lessons here have been three a day...the classes only once in a fortnight." Very good condition. Acclaimed Polish pianist, professor, and composer who was one of the founders of The St. Petersburg Conservatory of Music in 1862. Among his most gifted students were Igance Paderewski, Artur Schnabel, Alexander Brailowsky, and Anna Yesipova. (Inventory #: 232131)
$800.00 add to cart or Buy Direct from
Argosy Book Store
Share this item