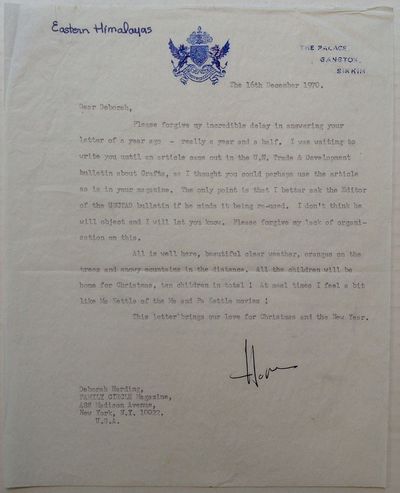 by COOKE, Hope (1940 - )
Sikkim, 1970. unbound. 1 page, 10 x 8 inches, The Palace, Gangtok, Sikkim, [Eastern Himalayas], December 16, 1970. Written to Deborah Harding, Editor at "Family Circle" Magazine, in part: "...I was waiting to write you until an article came out in the U.N. Trade & Development bulletin...as I thought you could perhaps use the article as-is in your magazine. The only point is that I better ask the Editor of the UNCTAD bulletin if he minds it being re-used. I don't think he will object and I will let you know. Please forgive my lack of organization on this...All the children will be home for Christmas, ten children in total! At meals I feel a bit like Ma Kettle of the Ma & Pa Kettle movies..." One horizontal fold; two pinholes in the right margin; minor wrinkling and creasing at the edges. Very good condition. American socialite and writer who became the "Gyalmo" of the 12th King of Sikkim. Around the time this letter was written, India and China had engaged in hostilities and it was feared (by India) that Sikkim might choose to be annexed to Tibet by China. (Inventory #: 232195)
$100.00 add to cart or Buy Direct from
Argosy Book Store
Share this item