The Girl Who Had Everything: The Story of "The Fire and Ice Girl" 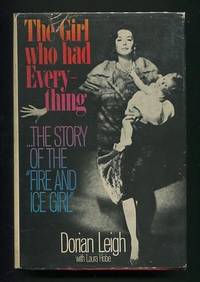 by Leigh, Dorian, with Laura Hobe
Garden City NY: Doubleday & Company, Inc.. Very Good+ in Very Good dj. 1980. First Edition. Hardcover. 0385143311 . [tight clean copy, minimal shelfwear, remainder spray to bottom edge else Near Fine; jacket has one small closed tear and associated creasing at top of front panel, visible wear at top corners]. (B&W photographs) Autobiography of one of the world's first supermodels (before that term existed), who was also purported to be one of Truman Capote's primary inspirations for the character of Holly Golightly in "Breakfast at Tiffany's" (although similar claims have been made by and on behalf of others). Leigh was a fashion-industry icon in the 1940s and 1950s (as was her sister, Suzy Parker), and as this book demonstrates, an amazing number of top-flight photographers turned their lenses on her. In addition to the jacket-photo combo – the front by Helmut Newton, the rear by Richard Avedon (for Revlon's famous "Fire and Ice" campaign) – the book includes work by Irving Penn, Horst, Louise Dahl-Wolfe, and Lord Snowden. (Be aware, by the way, that the rear jacket panel on the book club edition of this book is blank, probably due to some kind of rights-clearance issue -- so this, the trade edition, is the one you'll want.) . (Inventory #: 18179)
$50.00 add to cart Available from ReadInk
Share this item
ReadInk
Offered by

Someone in the Dark

Chicago : Pellegrini & Cudahy , (c.1947)
(click for more details about The Sleeping & the Dead: Thirty Uncanny Tales [*SIGNED*])
View all from this seller>