The Everett massacre; a history of the class struggle in the lumber industry 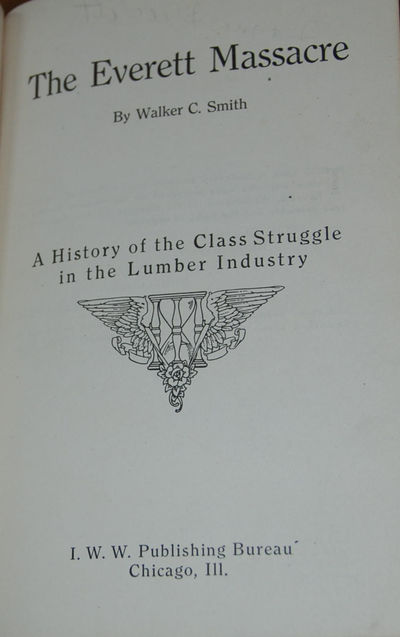 by SMITH, WALKER C.
Chicago,Ill: I.W.W. Publishing Bureau, 1917. First Edition. 8vo, pp. 302. Illustrated with photographs. Bound in publisher's cloth stamped in gilt (hinges tender) a good copy. Former owner's signature on the copyright page. Miles 4515. A confrontation between IWW activists supporting local shingle workers on strike . The laborers were met with force by "deputies" hired by business leaders. At the end of the mayhem, 2 citizen deputies lay dead with 16 or 20 others wounded, including Sheriff G McRae. The two businessman-deputies that were shot were actually shot in the back by fellow deputies; their injuries were not caused by Wobbly gunfire. The IWW officially listed 5 dead with 27 wounded, although it is speculated that as many as 12 IWW members may have been killed. (Inventory #: 49270)
$138.00 add to cart or Buy Direct from
Second Life Books
Share this item

London : Fortey , 1845
(click for more details about A COPY OF A LOVE LETTER; written by a Old Gentleman to a Young Lady in this Neighborhood (signed O. C.) (with:) The Young Lady's Answer)
View all from this seller>