Collapse of Monte Canto near Piuro 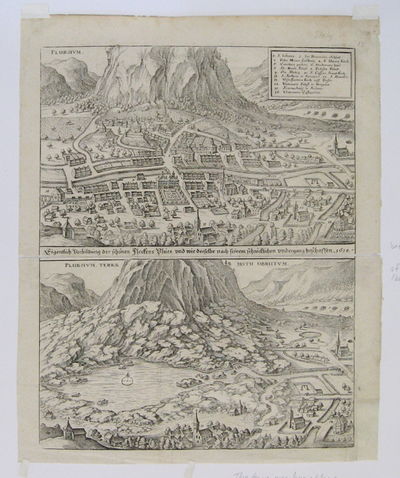 by MERIAN, Matthaus
Piuro, Italy: MERIAN, Mattheus, 1639. very good. Copper engraving. Image measures 11 1/4" x 6 3/4". These two engravings provide two views of the Italian town of Piuro, in Lombardy, before and after the 1618 collapse of a nearby mountain. The mountain had been previously heavily mined and tunneled, and it is likely this instability that caused it to collapse in the wake of heavy rainstorms, burying the town. Of the 16 important sites in the town which appear in the upper map, listed in a key in the upper right, only 5 remain in the lower version, the rest replaced by large expanses of water and rock. The text between the two prints reads, "Eigentlich Vorbildung des schÃ¶nen Fleckens Plues, und wie derselbe nach seinem schrÃ¶cklichen Untergang beschaffen." The print was included in "Itinerarium Italiae Nova Antiqua..." by Martin Zeiller, which Merian published in 1640. The two views have been assembled on a single lining and are in very good condition, other than some wear and paper deterioration at the corners. The Swiss-born MatthÃ¤us Merian (1593-1650) studied in Zurich and Paris before moving to Frankfurt am Main, where he worked as an engraver, etcher and publisher. Most well-known for his series of "Topographies," he also produced a variety of other prints of industry as well as nature. (Inventory #: 232420)
$450.00 add to cart or Buy Direct from
Argosy Book Store
Share this item