THE MILL ON THE FLOSS 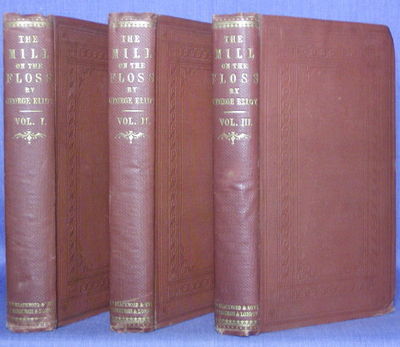 by Eliot, George [pseudonym of Mary Ann Evans]
1860. In Three Volumes. Edinburgh and London: William Blackwood and Sons, 1860. 16 pp Vol III undated ads. Original blind-stamped cinnamon-brown cloth. First Edition. This is the sad tale of Maggie Tulliver, from the Dorlcote Mill on the Floss River -- a novel noteworthy more for its accurate depiction of rural characters than for its rather drastic solution to an intricate plot. The novel also helped to break new ground in what was "acceptable" fare for reading: on a boating trip Maggie is "innocently but irremediably compromised" by her cousin's fiancé -- a fate to be shared by Thomas Hardy's TESS over thirty years later. This copy does not have the preliminary ad leaf in Vol I; according to Carter this is the first state, as the leaf was inserted in later copies to be issued. The volumes are in Carter's binding 'B', with the Edmonds & Remnants binder's ticket (the 'A' binding, identical except for the spine gilt, typically was by "Burn & Co."); Carter "hypothesizes" that 'B' might have followed 'A', but leaves it open to question. Also, this copy's Vol III ads cite the "Seventh Edition" of ADAM BEDE, while some copies have ads citing the "Eighth Edition." This is a near-fine set, bright and attractive, with scarcely any external wear or soil (the slightest of wear at the foot of two spines, one small rub in the center of one spine). The inner hinges (endpapers) are expertly and almost-invisibly strengthened with the addition of matching yellow-coated paper in the gutters; the endpapers themselves are the originals. The volumes are tight, there is no foxing on the leaves, and the gilt on the spines remains unusually bright. The first edition of THE MILL ON THE FLOSS is not all that scarce, but it is becoming quite difficult to obtain in this condition. Baker & Ross A5.1.a(1); Sadleir 816a; Wolff 2060; Carter BV pp 110-1 (& plate VIII). (Inventory #: 12183)
$2,650.00 add to cart or Buy Direct from
Sumner & Stillman
Share this item