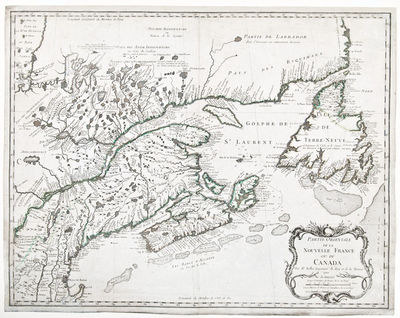 by BELLIN, Jacques Nicolas (1703-72)
[Paris: Bellin], 1755. Engraved map, period hand-colouring in outline. Bellin's foundation map of eastern Canada. First issued in 1744, Kershaw has identified 4 editions of the map, with multiple states, by Bellin (plus a subsequent re-issue by Homann Heirs). The present map is an example of the final state by Bellin. "Numerous changes have been made to the plate, notably the left-hand corner, west and south of Lake Champlain, has been completely re-engraved, with changes to the Saint Lawrence River, Lake Ontario, Cape Cod ... Notably 'la Pointe Riche' has been added towards the top of the west coast of Newfoundland, somewhat surprising for a French map" (Kershaw). Importantly, this map would be the basis for many future mappings of the region, including those by Homann Heirs, Bowen, Jefferys and Turner. Kershaw, Early Printed Maps of CanadaIII:689; Sellers and Van Ee, Maps and Charts of North America and the West Indies 3498; Phillips, A List of Maps of America, p. 622. (Inventory #: 25679)
$1,500.00 add to cart or Buy Direct from
Donald A. Heald Rare Books
Share this item
Donald A. Heald Rare Books
Offered by

The Merchant of Venice

London : Printed by Tho. Cotes , 1632
(click for more details about The Merchant of Venice)

An Oration, delivered July 4, 1789, at the Presbyterian Church in Arch Street, Philadelphia ... Published at the Request of the Pennsylvania Society of the Cincinnati

Philadelphia : T. Dobson , 1789
(click for more details about An Oration, delivered July 4, 1789, at the Presbyterian Church in Arch Street, Philadelphia ... Published at the Request of the Pennsylvania Society of the Cincinnati)
View all from this seller>