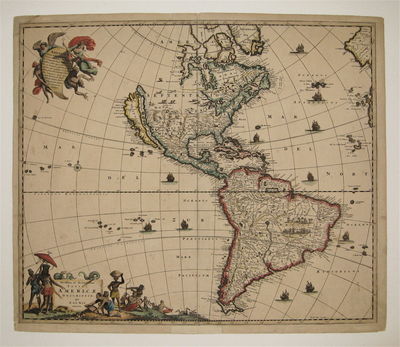 by DE WIT, Frederick
Amsterdam. unbound. Map. Engraving with original hand coloring. Image measures 19 1/4" x 22 3/4". This map of the Western Hemisphere is one of the finest and most replicated examples of Dutch cartography. Drawn in the late 17th century, this early state of the map illustrates a number of then-held beliefs about the geography of the New World now known to be incorrect. California is depicted as an island, Great Lakes remain inaccurately open, and rivers exist where there are none. Moreover, the map's labeling combines the names of factual cities with more mythic ones, gleaned largely from Native American lore via the Spanish. In the lower left-hand corner, a cartouche depicts Native Americas harvesting crops and performing other every-day activities around a sign bearing the map's name. Above in the top left corner, angels carry a short text describing America that is inscribed on a round support. Eleven beautifully-rendered ships scattered throughout the Atlantic and Pacific Oceans indicate the travels of Western explorers. The map is in good condition, with small stain upper left corner. Early repair to center fold outside of plate line. Frederick de Wit (1629/30--1706) was one of the foremost cartographers and map sellers of the Dutch Golden Age. Based in Amsterdam, he began with a small printing shop in 1654 and soon became internationally known for his city plans and wall maps of the world. His most famous work is the "Theatrum Praecipuarum Totius Europae," published after 1694, which contained 132 plans and views of European and Asian cities. By 1671, he was producing large folio atlases for both his shop and individual patrons that could contain anywhere between 15 and 150 maps. Today, these atlases grace the collections of many museums and institutions as evidence of the vibrant cartographic trade in Amsterdam in the middle- and late-17th century. (Inventory #: 232759)
$3,500.00 add to cart or Buy Direct from
Argosy Book Store
Share this item