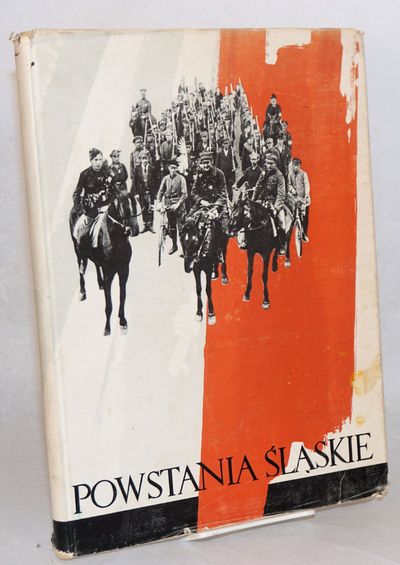 by Szewczyk, Wilhelm, opracowal; Jerzy Zietek, przedmowe napisal
Poland: Wydawnictwo "Slask" Katowice, 1961. 183p., profuse photogravure period photographs and documents in facsimile set amongst monochrome Mondrian- influenced page layout, red and black on white; quite effective. Sepia endsheet maps. Casebound in 13x9.5 inch cloth boards titled gilt with blue panel, in dj; textblock has a corner bump and some handling soil, wrapper still reasonably bright but quite worn. Good copy. Laid in is an 11.5x8.2 inch staplebound "Summaries and titles to illustrations" in English, staples badly rusting, mild external offset soil. First issue of the much-reprinted account. A plebicite was enacted per Treaty of Versailles 1919; Poles in Silesia had "a half victory" only; occupying allied armies refused to protect them against "the German terror." This volume commemorates 40th anniversary of the third uprising (1921). (Inventory #: 166334)
$25.00 add to cart or Buy Direct from Bolerium Books
Share this item