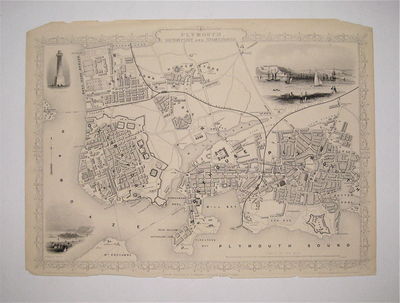 by TALLIS, John
London: Tallis, John, 1851. unbound. Rapkin, J.. Map. Steel engraving. Image measures 9 3/4" x 13 1/4". Lovely town plans of Plymouth, Devonport and Stonehouse in Deovon, England, bordered to the south by the Plymouth Sound and the Hamoaze stretch of the River Tamar. Includes districts, Railroads, and canals and three vignettes of notable buildings. The map is in good condition. Corners are worn and there are minor chips and small tears to the other edges, but they do not affect the image. John Tallis Jr. (1817-1876) was a London born bookseller who continued the prolific map publishing company started by his father. After a partnership with his brother, Tallis Jr. expanded the business to New York in 1849 as well as Boston, Cincinnati, Rochester, Philadelphia and Baltimore. This well known series of eighty maps was published in "Tallis's illustrated atlas and modern history of the world". This map is from the rare supplementary town plan series. (Inventory #: 232944)
$300.00 add to cart or Buy Direct from
Argosy Book Store
Share this item