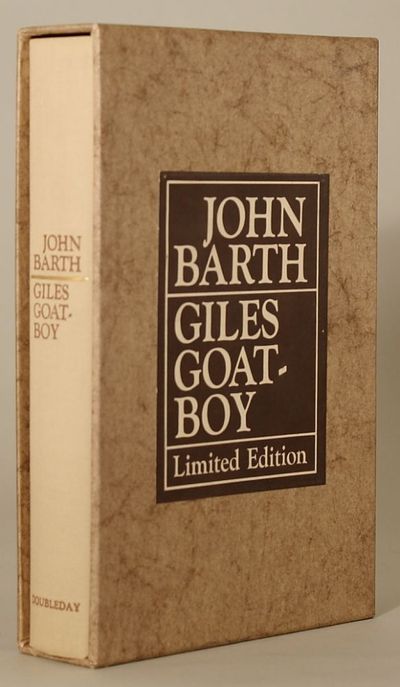 by Barth, John
Garden City: Doubleday & Company, 1966. Octavo, cloth. First edition. One of 250 numbered copies signed by Barth. "A fabulation in which the world is a university and the hero an experimental embodiment of the theriomorphic image of human nature. A clever satire, very much the product of its time. One of the works that began drawing SF ideas into the American literary mainstream." - Anatomy of Wonder (2004) II-80. "A demanding discourse on the nature of heroism filtered through a full array of self-conscious literary devices, it is an erudite monument and a fantasy landmark." - Barron (ed), Fantasy Literature 4A-20. "The book is allegory, parody, didactic treatise, fable, religious codex, and the taking of it seriously entails the taking of it unseriously ... you cannot ignore John Barth." - Burgess 99, p. 98. Dystopian university run by a computer. "Computer WESCAC as mind-force of the novel's university-world represents technique, the self-directing power of modern technology." - Mowshowitz, p. 103. Sargent, British and American Utopian Literature, 1516-1985, pp. 297-98. A fine copy in paper slipcase without dust wrapper as issued. (#137631) (Inventory #: 137631)
$250.00 add to cart or Buy Direct from L.W. Currey
Share this item
L.W. Currey Inc.
Offered by