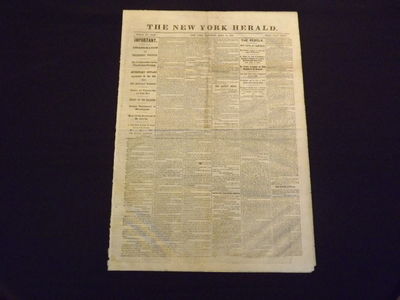 by [Lincoln, Abraham]
Newspaper, disbound, 23" x 16", 8 pp. Probably removed, dbd, minor staining and browning, a little creasing and fading; otherwise very good.This is an early report under the heading "Important Assassination of President Lincoln." This is the second morning edition of April 15, 1865 with the 3 a.m. update from Edward Stanton, the Secretary of War, which indicates Lincoln was still alive, but in very bad shape. The article describes John Wilkes Booth, "the actor", as the alleged assassin of the president. It describes how Booth entered Lincoln's box and after shooting him, stating "Sic semper tyranis" before he leaped on to the stage. This report gives considerable detail about the how Washington reacted to the news, and the scene at Lincoln's deathbed. There is also a good deal of coverage of the assassination attempt on Secretary of State, William Seward. This paper represents an important piece of American history. (Inventory #: 100999)
$1,800.00 add to cart Available from
Nicholas D. Riccio, Rare Books
Share this item
Nicholas D. Riccio Rare Books & Prints
Offered by