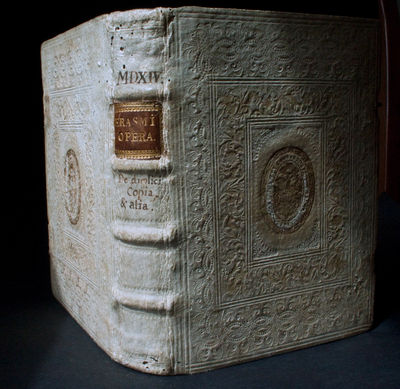 Several related works of Erasmus collected in one binding, including the first edition of Parabolae sive similia (a reported 1513 edition of Parabolae was a longstanding bibliographical error), and the first appearance of Erasmus's farewell letter to Jakob Wimpfeling (Epistle 305). In 1509, the year Mattias Schürer completed his apprenticeship and opened his own print shop, he struck an unauthorized edition of Erasmus's Adagia, purloined from the first edition of 1500. Anger on the author's part would have been justified. Yet, in spite of this commercial indiscretion, Erasmus favored Schurer with a warm, supportive, and lasting friendship. In October, 1514, he gave Schürer the manuscript of "Parabolae, sive similia," which Schürer decided to publish in tandem with a reprint of De Copia (although there are copies extant of Parabolae bound alone). It is fitting that Parabolae should be bound with Adagia in this copy, since it expands on the earlier work's idea of compiling classical maxims. Parabolae (that is, The Parables) is a catalogue of didactic similes gleaned from Plutarch, Seneca, and Pliny (who almost never used similes in his own text). The Adagia is also the subject of Erasmus's letter to Wimpfeling, whom he thanks for recommending it for a school text. Schürer's edition of Adagia of 1515 is the first to contain the printer's own "table of proverbs" to function as a key to the collection. In all, Schürer published 57 editions of 15 titles by Erasmus in the five year period from 1514 to 1519, the year he died. (Inventory #: 5374)
$14,000.00 add to cart Available from
Rare Book Studio
Share this item
Rodger Friedman Rare Book Studio
Offered by