THE BUREAU: (PAMPHLETS FOR THE PEOPLE) DEVOTED TO THE COMMERCE, MANUFACTURES, & GENERAL INDUSTRIES OF THE UNITED STATES. PRINTED AND PUBLISHED BY THE BUREAU PRINTING COMPANY, 101 AND 103 WABASH AVE 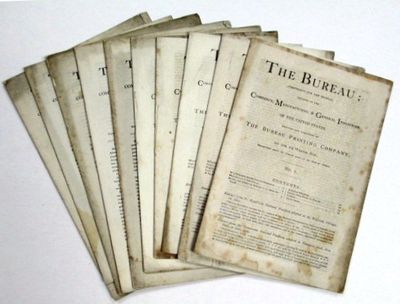 by Chicago Commercial Magazine
[Chicago, 1870. Nos. 1, 2, 3, 4, 6, 7, 8, 9, 10, 11. Ten issues, lacking only No. 5. Each is 16pp, stitched, caption title [as issued]. Scattered dustsoil, foxing, and light to moderate wear. Good+. An unusual magazine, published from 1869 through 1872, devoted to the themes of commerce and protectionism. The first article explains "Why Irishmen should vote for Protection," reminding that 'free trade' means "British free trade;" and argues that even Adam Smith would support a policy of protection for the U.S. Subsequent issues elaborate, and assert "The interest of the South in Protection," as well as that of the West and "the colored man." FIRST EDITION. Not in Lomazow, Ante-Fire Imprints, Eberstadt, Decker, Sabin. I Union List of Serials 846 [8]. (Inventory #: 9894)
$650.00 add to cart or Buy Direct from
David M. Lesser, Fine Antiquarian
Share this item
David M. Lesser, Fine Antiquarian Books LLC
Offered by