SPEECH OF GOVERNOR YATES, AT THE GREAT WAR MEETING AT CHIGAGO [sic], AUGUST 1, 1861 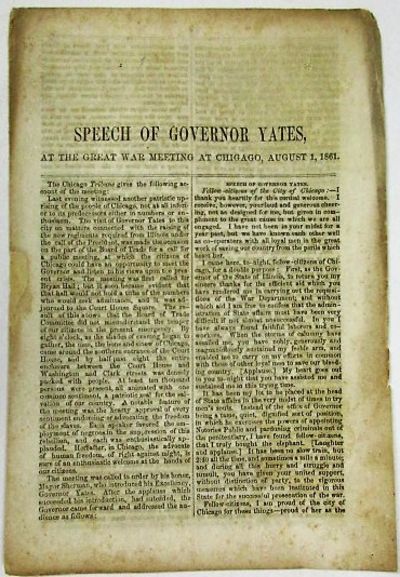 by Yates, Richard
[Springfield?, 1861. Caption title [as issued]. 9, [1 blank] pp. Lightly foxed and worn, with some inner margin wear. Good+ or so. The Illinois Governor speaks of the burdens of war-time office. "I have found, fellow-citizens, that I truly bought the elephant. It has been no slow train, but 2:40 all the time, and sometimes a mile a minute." He praises Chicago as "the beautiful Queen City of the Lakes-- as the centre of commerce and trade," as well as for the bravery of its citizens. Yates traces the growth of "the spirit of secession" from the Missouri Debate of 1820. Rejecting any basis for secession, he says, "The South has been the petted child of this government. She had the control of its offices and its power." He identifies slaves as a significant element of the South's strength, and calls for employing "all means" to suppress the rebellion. "Slavery is not only in the course of ultimate but immediate extinction." FIRST EDITION. Not in Sabin, Ante-Fire Imprints, Decker, Eberstadt, Graff, Soliday, Nevins, Monaghan, Bartlett. OCLC 13649687 [8] as of May 2019 [spelling 'Chicago' correctly]. (Inventory #: 12904)
$375.00 add to cart or Buy Direct from
David M. Lesser, Fine Antiquarian
Share this item
David M. Lesser, Fine Antiquarian Books LLC
Offered by