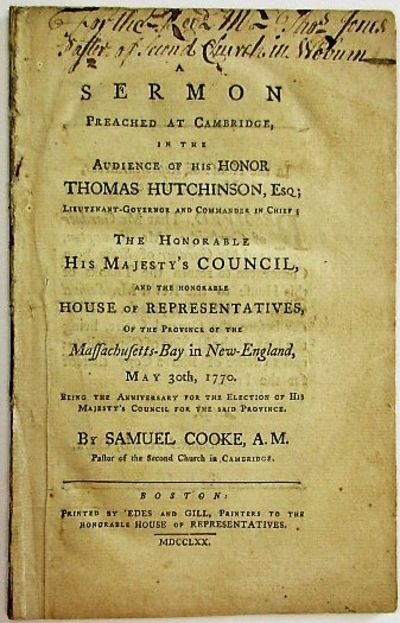 by Cooke, Samuel
Boston: Edes and Gill, 1770. 47pp, without the half title, disbound. Small release stamp at base of last blank page. Light tan and fox. Else Very Good. The Massachusetts Election Sermon preached just after the Boston Massacre. Cooke does not let the occasion pass without special notice. He recalls the Colonists' earliest Charter with the Crown, which "was not considered, as an act of grace, but a compact, between the Sovereign and the first patentees;" its dissolution; the ensuing despotic regime of the hated Andros; and finally the adoption of a new Charter, which required that "a sacred regard would be maintained to the rights of British subjects;-- and that the royal ear would always be open to every reasonable request and complaint." Separation from Britain would be "abhorrent," and he regrets that "Americans are thus led to plead with their parent state." Cooke also "pleads the cause of our African slaves; and humbly proposes the pursuit of some effectual measures, at least, to prevent the future importation of them...Ethiopia has long stretched out her hands to us-- Let not sordid gain, acquired by the merchandize of slaves, and the souls of men-- harden our hearts against her piteous moans." FIRST EDITION. Evans 11613. Not in Blockson, Adams Independence, Adams Controversy, Eberstadt, Work, Dumond. (Inventory #: 17950)
$450.00 add to cart or Buy Direct from
David M. Lesser, Fine Antiquarian
Share this item
David M. Lesser, Fine Antiquarian Books LLC
Offered by