TO THE DEMOCRATIC PARTY OF ILLINOIS 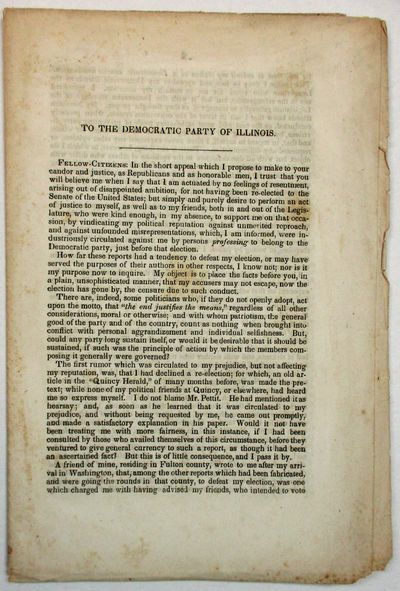 by [Young, Richard M.]
[np, 1843. Caption title [as issued], untrimmed, uncut. 14, [2 blanks] pp. Light soil, Very Good. Signed by Young in type at the bottom of page 8, and dated January 16, 1843. A rare pamphlet, not found in the standard references. Young became a U.S. Senator from Illinois in 1836. At the end of his term, rather than renominating him, the Illinois Senate named Richard Breese as his successor. As perhaps a consolation prize, Young was made a Justice of the Illinois Supreme Court. Abraham Lincoln would appear before him in that Court on more than seventy occasions. Writing from Washington in January 1843, Young is bitter. He claims his enemies have distorted his record. "The Senator, it was charged, was leaning toward President Tyler, thereby casting suspicion on his Democratic orthodoxy" [Johannsen, Stephen A. Douglas 112-113]. Several rivals, including Douglas, had sought Young's seat. The contest "produced serious tensions within the Democratic party" [Id.]. Here Young reviews the unfair treatment, printing testimonials from luminaries like Thomas H. Benton and John C. Calhoun, who attest to his fealty to Democratic doctrine. Benton says, "I have always considered you as being opposed to a high tariff-- opposed to a national bank-- and in favor of the reduction or abolition of the salt tax. I have always considered you a faithful and efficient member of the Democratic party." Calhoun is "surprised" at the false reports of Young's apostasy. FIRST EDITION. Not in NUC, AI, Sabin, Eberstadt, Decker, Soliday, Graff. Not located on OCLC or the AAS online site as of June 2019. (Inventory #: 13013)
$500.00 add to cart or Buy Direct from
David M. Lesser, Fine Antiquarian
Share this item
David M. Lesser, Fine Antiquarian Books LLC
Offered by