CIRCULAR OF WHIG COMMITTEE WITH TICKET 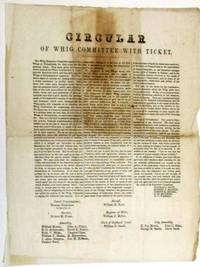 by Whig Party of Philadelphia
[Philadelphia, 1856. Broadside, 9.25"x 12". Printed in three columns. Horizontal crease through center, some darkening at mid- and upper-center, and a bit of minor edge wear. Good+. A broadside illustrating the fluidity of political alignments in the turbulent 1850's, as the Sectional Crisis exerted stresses on the Whig and Democratic Parties. The Executive Committee explains to fellow Whigs its endorsement of the Native American ticket for local and State offices. Disclaiming support for "the proscriptive measures which it is alleged are advocated by them" [i.e., hostility to Catholics and immigrants], the Committee emphasizes that Native Americans oppose the Pierce Administration's perpetration of "the shameless outrages on the rights of freemen in Kansas; and the innumerable injuries involved in the repeal of the Missouri Compromise." This is a significant demonstration of the "disorganized" condition and impending collapse of the Whig Party as a national political force. Not in Sabin, Eberstadt, Decker, Dumond, Work, Blockson, LCP, NUC. Not located on OCLC as of October 2019. (Inventory #: 20432)
$500.00 add to cart or Buy Direct from
David M. Lesser, Fine Antiquarian
Share this item
David M. Lesser, Fine Antiquarian Books LLC
Offered by