JOURNALS OF THE ANNUAL CONVENTIONS OF THE PROTESTANT EPISCOPAL CHURCH IN THE DIOCESE OF VIRGINIA, 1836-1867 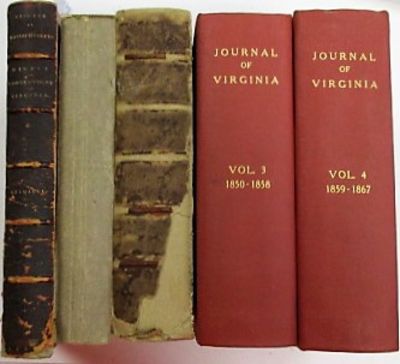 by Virginia
First Editions. 1836-1867, inclusive, a total of 31 Journals [1865 and 1866 Conventions printed together in 1866]. A continuous run of Virginia Imprints: Richmond [1836-1840, 1844-1846, 1854-1864, 1866-1867]; Alexandria [1841-1843]; Lynchburg [1847-1849]. Journal for 1850 printed at Baltimore, for 1851-1852 at Washington, and for 1853 at Philadelphia. The Journals are generally in original printed wrappers and in Good+ to Very Good condition, with scattered wear [Journal for 1846 lacks wrappers and title page]. Bound in three volumes [the first volume without covers, the second and third in library buckram]. The Journals for 1861, 1862, 1863, and 1864 are Confederate Imprints. In addition to their significance as the primary source for the development of the Protestant Episcopal Church in Virginia the Journals provide a wealth of material on religious instruction of the slaves; travel and transportation conditions; cultural and religious life and education in Virginia; the Virginia Church's growing role as supporter of the southern slave system and advocate of African colonization of free Negroes; and the schism of the Church-- both nationally and within Virginia itself-- coinciding with the secession of the State and Civil War. Bishop Meade's 1861 Address mirrors the anguish of his fellow Virginians in leaving the Union but concludes, "Who can desire to retain a Union which has now become so hateful?" The Journals detail the participation of the Church in behalf of the Confederate Army, describe the siege of Richmond and other areas of conflict resulting from the "invasion of Virginia," and graphically portray the effects of the War. Also included in this offering: Hawks, Francis L.: CONTRIBUTIONS TO THE ECCLESIASTICAL HISTORY OF THE UNITED STATES OF AMERICA. VOL. I. New York: 1836. 286, 332pp. Lightly foxed, lacking the covers. As Sabin writes, "The Journals of the conventions of the diocese from 1785-1835, inclusive, were reprinted as an appendix to" this volume; and Dashiell, T. Grayson: A DIGEST OF THE PROCEEDINGS OF THE CONVENTIONS AND COUNCILS IN THE DIOCESE OF VIRGINIA. Richmond: 1883. 431pp, untrimmed, lacking the covers. Sabin 100513. Parrish & Willingham 9212-9215. Haynes S14590. AI 39784, 46468, 52538, 58116, 40-5613, 41-4359, 43-4222, 44-5150. Cappon 4840. (Inventory #: 5455)
$2500.00 add to cart or Buy Direct from
David M. Lesser, Fine Antiquarian
Share this item
David M. Lesser, Fine Antiquarian Books LLC
Offered by