THE VOICE OF GOD IN CALAMITY: OR, REFLECTIONS ON THE LOSS OF THE STEAM-BOAT HOME, OCTOBER 9, 1837. A SERMON: DELIVERED IN THE SECOND PRESBYTERIAN CHURCH, CHARLESTON, ON SABBATH MORNING, OCTOBER 22, 1837: BY THE REV....PASTOR. SECOND EDITION 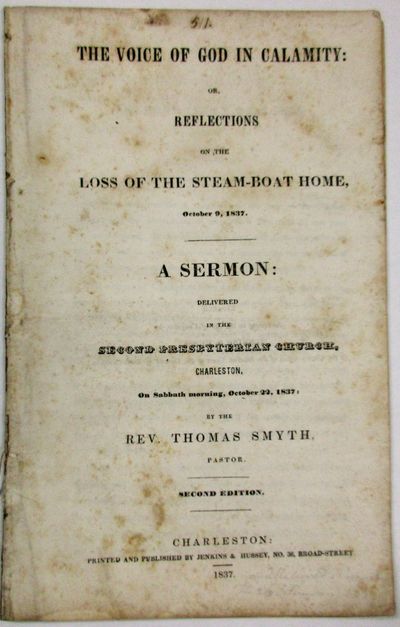 by Smyth, Thomas
Charleston: Jenkins & Hussey, 1837. 32pp, disbound. Scattered foxing. Good+. Though styled 'Second Edition,' this and the 'Fourth Edition' are the only ones that American Imprints and NUC record. Turnbull records only the fourth edition, also printed in 1837. Sabin records the first, second, and fourth. "The text of all the editions listed are from the same setting of type with slight variations in the preliminary pages." Sabin. The sermon is on "the loss of the Packet Home, and the destruction of ninety-five lives." Smyth takes note of the ongoing investigation by "the citizens of Charleston, and their determination to take whatever other measures may be deemed most likely to prevent the recurrence of similar disasters for the future." He warns of "the cupidity, or experimenting boldness, or the reckless indifference of men." The terrible last moments are recounted, and a list of Passengers Lost and Passengers Saved is included at page 32. A family of Levys and a family of Croomses were lost. An Appendix, pages [23-31, is a 'Narrative of the Loss of the Steam-Packet Home,' by B.B. Hussey, one of the passengers. It was "approved by other passengers now in Charleston." In addition to his activities as a clergyman and family man (he and his wife had ten children), Smyth assembled "probably the most complete collection of theological books to be found in any private library in America" [DAB]. FIRST EDITION. AI 46839 [5]. Sabin 85338. II Turnbull 396 [4th ed.]. Not in Eberstadt, Decker. (Inventory #: 16346)
$350.00 add to cart or Buy Direct from
David M. Lesser, Fine Antiquarian
Share this item
David M. Lesser, Fine Antiquarian Books LLC
Offered by