ON THE RISE AND SIGNALIZED LOT OF THE UNITED AMERICANS. A SERMON, DELIVERED, FEBRUARY 19, M,DCC,XCV, ON OCCASION OF A THANKSGIVING THROUGHOUT THE UNITED STATES, TO THE CONGREGATIONAL SOCIETY, IN NORTON. PUBLISHED AT THEIR REQUEST. BY...THE CONGREGATIONAL MINISTER OF NORTON 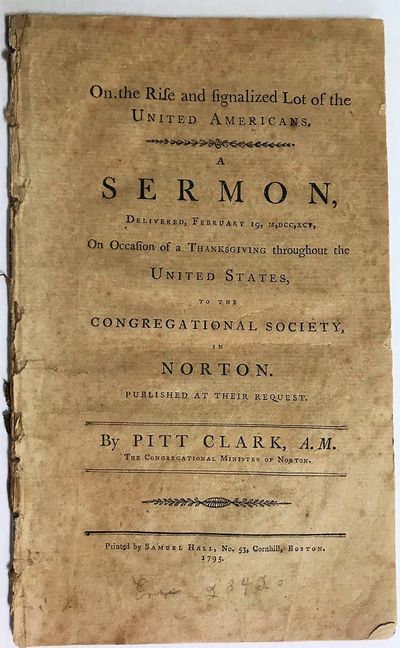 by Clark, Pitt
Boston: Printed by Samuel Hall, No. 53, Cornhill, 1795. 30pp, lacks the half title. Disbound. Tanned and moderately foxed. Good+. Clark's Sermon is a "sketch" of "the discovery, the protection, the rise, the independent freedom, and exalted establishment of our native country." He starts with Columbus, then moves on to the early settlers, whom God protected "against the howlings of barbaric tribes, and the roarings of lion-like beasts." Clark recounts threats from European powers, and America's victorious deliverance. Clark warns presciently that disparities in "property, rank, learning, and worldly station, will more or less divide the political hemisphere into parties. Opposite parties become tenacious of their own, and jealous of each other's opinions." As commerce grows, Clark fears "the speculator, the trader, the stock-jobber, or he, who gets the most money with the least labor." Evans 28420. NAIP w021409. (Inventory #: 21080)
$250.00 add to cart or Buy Direct from
David M. Lesser, Fine Antiquarian
Share this item
David M. Lesser, Fine Antiquarian Books LLC
Offered by