COMMUNICATION FROM HIS EXCELLENCY THE GOVERNOR, COVERING THE REPORT OF THE JUSTICES OF THE SUPERIOR COURT, ON THE QUESTION OF GRANTING NEW TRIALS 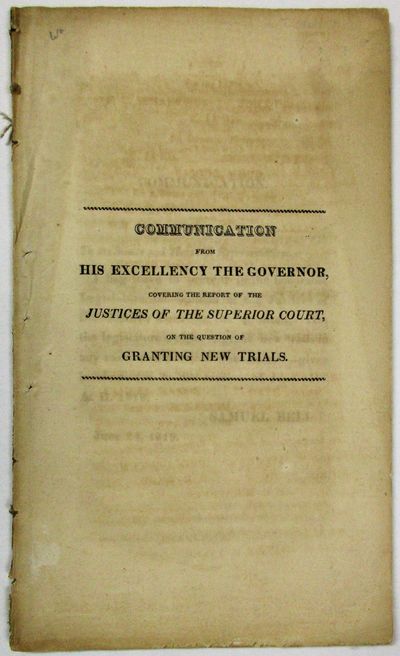 by New Hampshire
[Concord?, 1819. 35, [1 blank] pp. Disbound with a bit of loosening, else Very Good. An important pamphlet on the bedrock constitutional doctrine of separation of governmental powers. Here, Justices of the New Hampshire Superior Court strike down the Legislature's attempt to "grant new trials in any case..." In a pending case, Merrill v. Sherburne, the New Hampshire legislature had granted Dorothy Merrill's petition for a new trial after the Superior Court had refused to do so. The Court, administering a well-deserved slap in the face to the Legislature, explains that an Act of a "legislature awarding a new trial in an action, which has been decided in a court of law, is an exercise of judicial power." A legislature may exercise only legislative power; any attempt to exercise judicial power is unconstitutional. Action by one branch of government breaches the separation of powers doctrine if that action would "defeat or materially impair the inherent functions of another branch." The Court discourses on the Separation of Powers, the history of the doctrine, and its necessity in a government of law. FIRST EDITION. AI 48849 [3]. Cohen 1128. Not in Sabin, Marke, Harv. Law Cat., Marvin, Eberstadt, Decker. (Inventory #: 18285)
$375.00 add to cart or Buy Direct from
David M. Lesser, Fine Antiquarian
Share this item
David M. Lesser, Fine Antiquarian Books LLC
Offered by