THE LIFE, PUBLIC SERVICES, AND INEXTINGUISHABLE CAREER, OF HON. JOHN DANFORTH, WRITTEN UNDER AUTHORITY OF THE MUSTACHE FUSILEERS ... WITH A PORTRAIT WONDERFULLY AND FEARFULLY ENGRAVED, ON STEEL, BY JOSEPH R HAMMOND 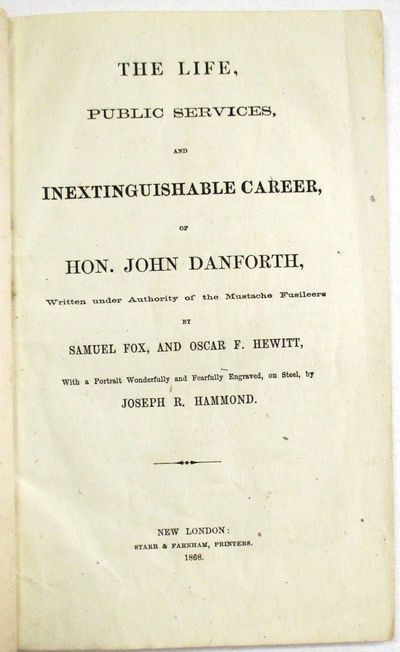 by Fox, Samuel and Oscar F. Hewitt
New London: Starr & Farnham, 1868. Original printed wrappers [some spotting and wear, rubberstamp number in blank top margin] Stitched, 32pp. Comical frontis of Danforth. Good+ or better. A rare and satiric discussion of Danforth's life, with obscure references to men and events in Connecticut and elsewhere. The authors, along with Danforth, were Justices of the Peace in New London, and so listed in Green's 'Connecticut Annual Register and United States Calendar' for 1870. The Mustache Fusiliers was one of many military companies organized in New York by immigrants who were banned from the regular militia. "Now the Fusileers meant 'The mustache Fusileers,' an organization of ancient date and wide repute. The object of this order is to protect the hearthstones of the widows of deceased bachelors." The authors describe a march from New York to Boston, the Fusileers turning out four hundred men dressed in fantastic uniforms of green, orange and blue. "John, like Horace Greely, was born black, but gradually became lighter and lighter, passing successively through the different shades of complexion, from darkest Ethiopian to lightest Circassian... John early developed a remarkable taste for music, and when he was two years old, was taken by his parents to see an Ethiopian Minstrel entertainment, with the hope that his mind would thereby receive a purely artistical twist, and be turned from the contemplation of the works of Beethoven and Mozart, for which he showed an alarming fondness." FIRST EDITION. Not in Eberstadt, Decker, Sabin, NUC. OCLC 42518462 [2- Yale, NYHS] as of October 2019]. (Inventory #: 17733)
$450.00 add to cart or Buy Direct from
David M. Lesser, Fine Antiquarian
Share this item
David M. Lesser, Fine Antiquarian Books LLC
Offered by