SPEECH OF HON. RICHARD YATES, DELIVERED AT ELGIN, ILL. ON THE FOURTH DAY OF JULY, A.D. 1865 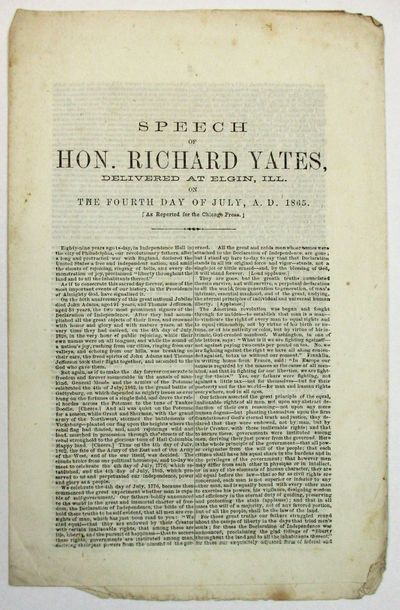 by Yates, Richard
[Jacksonville: Ironmonger & Mendenhall, 1865. Caption title [as issued]. 8pp, folded folio leaf, printed in double columns. Very Good. "You have carried our country through the most fiery ordeal which no other nation could have withstood." On this July 4, the first after War's end, Yates urges that future crises be met with fortitude: "What a set of ill-omened birds this age is afflicted with who always have a nightmare upon their affrighted visions," he says, referring to the "great uneasiness in the minds of sympathizers with treason." He supports Negro suffrage and the "individual and universal equality which is to save, not destroy, our country... You say the negro is not intelligent enough to vote, but this test would lead to the disfranchisement of a large portion of the whites." FIRST EDITION. Monaghan 832. OCLC 52416539 [8] as of June 2019. Not in Sabin, Ante-Fire Imprints, Decker, Eberstadt, Graff, Soliday, Nevins. (Inventory #: 12905)
$350.00 add to cart or Buy Direct from
David M. Lesser, Fine Antiquarian
Share this item
David M. Lesser, Fine Antiquarian Books LLC
Offered by