LAWS OF MARYLAND, MADE SINCE M,DCC,LXIII, CONSISTING OF ACTS OF ASSEMBLY UNDER THE PROPRIETARY GOVERNMENT, RESOLVES OF CONVENTION, THE DECLARATION OF RIGHTS, THE CONSTITUTION AND FORM OF GOVERNMENT, THE ARTICLES OF CONFEDERATION, AND, ACTS OF ASSEMBLY SINCE THE REVOLUTION 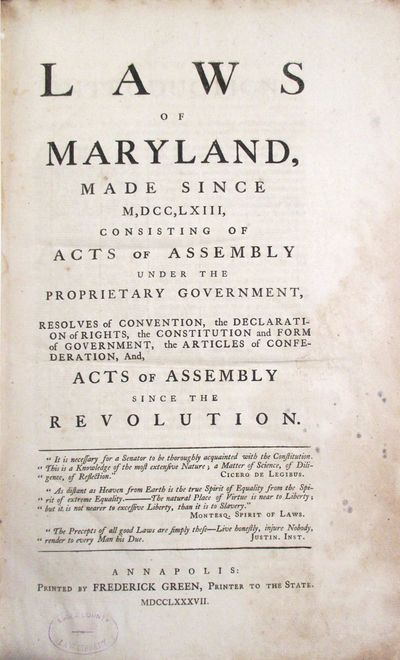 by Maryland
Annapolis: Printed by Frederick Green, Printer to the State, 1787. Folio, bound in modern paper over boards [some soil]. [458]pp. Some darkening and spotting, particularly to margins of early leaves; a light old rubberstamp. Several ink notations, in a knowledgeable and contemporary hand, in index and appendix. Text generally clean and Very Good. The Introduction is by Alexander C. Hanson, who had, along with future Supreme Court Justice Samuel Chase, been directed by the Legislature to work with Frederick Green to produce this volume. Hanson criticizes Chase's inactivity: his "superior talents might have enabled him to render complete satisfaction" in the completion of the project; Hanson, left to his own devices, has done his best, explaining that he has spent a large amount of time providing a useful Index. The volume begins with the Laws of 1765-1774, at which point "end the laws under the proprietary government." "The arbitrary acts of the king and parliament of Great-Britain" resulted in a "provincial convention" in June 1774. On July 3, 1776, it resolved to elect a new Convention, "for the express purpose of forming a new government, by authority of the people only." The enabling resolution is printed in full, followed by the Proceedings of the Convention, which assembled on August 14, 1776, in Annapolis. Its daily doings are printed, as is the culmination of its proceedings, the Declaration of Rights, adopted finally on November 3, 1776 [a Sunday], and a proposed Constitution and Form of Government [presented November 3 and adopted on November 8]. The Laws are printed from the 1777 Session through the close of the 1784 Session in January 1785, including all the legislation during the Revolutionary years and the post-Revolution years immediately thereafter. The Articles of Confederation are printed as Chapter XL of the Laws of 1780, Maryland finally recognizing that "the enemy is encouraged, by this state not acceding to the confederation." FIRST EDITION. Evans 20483. II Harv. Law Cat. 68. (Inventory #: 12772)
$1500.00 add to cart or Buy Direct from
David M. Lesser, Fine Antiquarian
Share this item
David M. Lesser, Fine Antiquarian Books LLC
Offered by